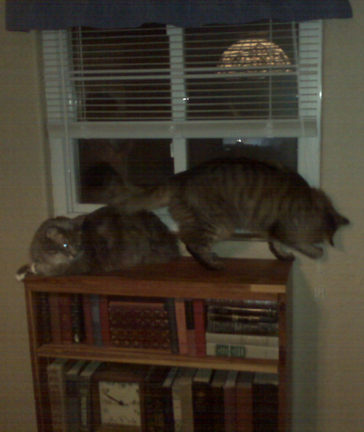 "Hey, this new channel has strings attached...its one of those interactive things!"

This is a horrible picture taken with The Boy’s phone. Kitten Thunder has found a new channel on OutTV! This is not to say The Boy and I put in a new window. It has been there since we moved into the house in September. But, for some reason, Oliver noticed it this week. We did some quick removal of stuff once he decided to get up there (he would have removed it for us, if we hadn’t). And, once Oliver was up there Obi was quick to follow.

"What's that movie where the TV possesses the watcher?"

The really fun thing about this window is that it’s in a little nook of the house. You can see the breakfast room from this window. That should be a lot of fun this summer when the windows are open and kitten thunder can see each other on OutTV (outside in TV?)

On a side note: Obi has been running from window to window all week, trying to catch everything that is going on. Is that channel surfing?

Another side note: The squirrels on OutTV have been a little frisky this week. Do we have to pay extra for “adult” programming? Can we get a parental block? Obi’s a child!

Tens of Fans and Aiming Higher 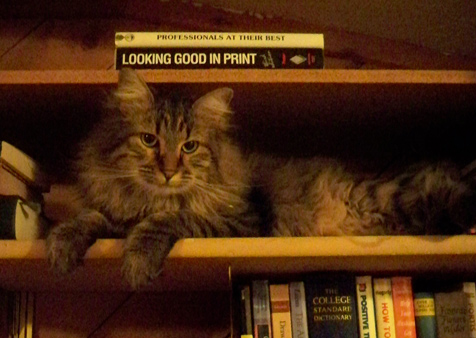 “Do you think Dale Carnegie will help me influence people to open cans of tuna?”

As some of you know, Kitten Thunder has tens of fans. At first, the fame of forty fans went to Obi’s head and he tried to quit his day job. I’m happy to report that he has returned to work, greeting us at the door and offering a belly to rub after we’ve taken our coats off. My showers continue to go unsupervised but I can’t help but wonder if that has more to do with the evil plastic bag that attacked him in the bathroom the other day.

I found Obi on the bookshelf with my public relations books last night. Now, some of you may be thinking that this isn’t unusual. But: 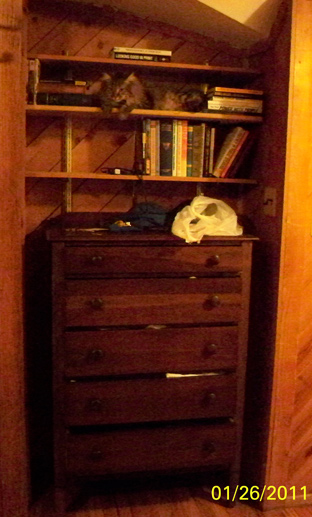 "Is this what they mean by lofty goals?"

Obi is not a jumper. He routinely misses the jump to our window sills, three feet off the ground. Higher surfaces are Oliver’s only surefire way of escape when he’s over the thundering.

Obi is a Supah Star!

This is going to be a really short post. I just wanted to let you all know you’ve contributed to a real problem in our household. Now that Obi is a blog star, with something like FORTY fans, he has decided to quit his day job.

This morning I showered without ANY supervision. The Boy says he was supervised while brushing his teeth…but barely. And, when I came home tonight, no one met me at the door. I had to get inside, take off my coat, walk all the way to the living room, and find Obi on the rug to give him a belly rub.

Hopefully our complaints will inspire Oliver, as Chief Executive Kitten, to give Obi a talking-to. Such behaviour will not stand just because Oli has been taking some extra medical leave as of late. If Obi gets back to his normal routine tomorrow MAYBE we’ll take today out of his vacation time and let things go at that. Maybe.

Posted in Attempt at humor, Cats

Attack of the Cave Monster!

During the winter I like to keep a blanket on the couch to be extra cozy. Oliver likes to lay under the blanket with me. In the new house this is occasionally an issue when The Boy or Obi comes up and sits down on the space in front of me on the couch before I register that they are about to sit on Oli. The other issue is that my fuzzy, super-cozy blanket is not big enough for two people and up to two cats when we’re sharing the couch. Instead, we now have The Boy’s blue blanket. It solves the problem…and has invented a new game.

The blue blanket reaches the floor. And creates a cave. Obi would never snuggle under a blanket, but he is all about games like Bed Monster, Towel Monster and now…Cave Monster. As cave monster, Obi waits for someone to be “unsuspecting” outside the cave and then…ATTACK! If his attack causes him to leave the cave completely he walks, nonchalantly, to the window. Then to the other window. Dum dee dum dee dum. Then he sprints at full speed back to the cave. It’s a simple game, but it gives us the giggles.

The Boy was good for about 15 minutes of Cave Monster before he gave up in favor of being productive in a non-getting-bit-and-scratched way. Once The Boy was gone, I noticed Obi in my office trying to talk Oliver into being “unsuspecting.” Oli is still in the condo, fully suspecting.

"Beware the cave monster...bring tuna if you hope for safe passage."

Posted in Attempt at humor, Cats

Please, Mum, can I mooch some more?

For lunch at our house, we have an extra helping of cute. Obi has taken to reaching toward the counter while I’m making my sandwich. It is adorable because it is so ineffective. Not like when Oliver stretches his super long body up the side of the counter and can place his paw firmly in the middle of your lunch. 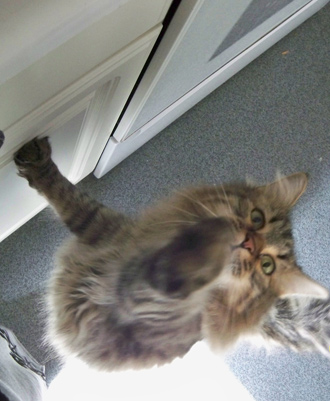 Oh, by “ineffective” I mean Obi gets about half the turkey I’d intended for my sandwich as a reward for his cuteness. Yeah, cute carries a lot of weight in my world.

"I don't know why Obi begs for food. So undignified."

"If I pretend to make a call, can I have the nut?"

On Sunday we put up the squirrel feeder, cleverly disguised as an old-fashioned telephone. We also, luckily, cleared off the trunk in the dining room that is under the window. High-speed Kitten Thunder could have really done some damage to the stuff that was on there.

On Sunday there was very little action. At some point a squirrel came by and got the “teaser” peanut that was sticking out of the box. But no one saw it. So this morning I pulled another peanut out to tempt the squirrels, poured a cup of coffee, and settled in at the dining room table for some entertainment.

We were not disappointed! It started with a squirrel on the roof. And Obi about ready to go through the roof with excitement. Then another squirrel came onto the porch. As I was watching them try to figure out how to get to the peanut a third squirrel came from across the street. There was much bickering between the squirrels about how to get to that peanut. I’d love to show you video…but my brilliant idea of using the camera from work, which happened to be in my pocket, has been rendered less brilliant by the fact that I don’t have the editing software I need at home. And no, you can’t listen to what The Boy and I were saying at the time. So you’ll have to wait…I’ll be finding some software soon.

A car drove by and someone opened their garage and the squirrels left without their peanut. But OutTV’s Squirrel Feeder is definitely a new favorite program. Even Oliver, who napped through the episode with squirrels in it, loves the new show.

Posted on January 13, 2011 | 6 comments
I may win my place in the Crazy Cat Lady Hall Of Fame for admitting this, but…one of my criteria for the new house was that it had to have good windows for Kitten Thunder. And I got my wish! I didn’t even have to have a stand-off with The Boy because this house came available and also happens to have everything else we were looking for. No “yes, THAT house has a roof and heat and everything, but THIS house has better programming on OutTV.”

The window in my office is at kitty condo height and looks out on the garage and our backyard neighbor’s trees. It’s a favorite spot for both boys.

"I wonder if The Boy would cook a ring necked dove for me..."

The front windows look out on the yard through some bushes. The windows are low so the boys can watch TV while standing on the floor. This is a great place to put bread to attract extra programming.

"Why don't the squirrels come when I call? I asked him nicely."

For Christmas, I asked for additional programming for OutTV. We received a squirrel feeder from my aunt and uncle. I’m not putting it up until Saturday (I should mention here that we didn’t “have” Christmas until last weekend, so I’m not totally behind on things) because I enjoy a little OutTV myself.