Cling On, Cats. Not to be confused with Klingon Cats.

I’m pretty sure this is one of only a few funny parts of HOP:
Easter Bunny: The EGG of DESTINY can only be wielded by a bunny.
Evil Chick: Look, I’m wielding it. I’m wielding it AGAIN!

The Boy wielded the magic toy making stick this evening and produced two flat leopard skin mousies, the teddy bear mouse, a milk ring, and $3 toy designed to act like a milk rink, a squeaky ball…and enough cat hair to knit ourselves a kitten. Obi was very excited. Then he was overstimulated. He ended up piling them all together so he could just lay on them.

Then The Boy threw them all over the living room. Obi went back to playing with the tiny fuzzy that has been out all week. It’s about the size of a dime but don’t underestimate it. That fuzzy is wily. It requires vertical pounces of at least a foot and a half (while fluttering your feet like a ballerina, for some reason). 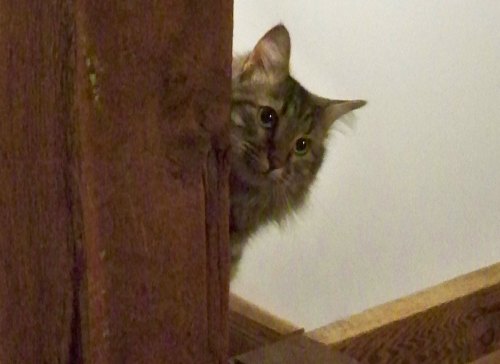 "Any minute, a tuna will come by and I will pounce. What does a tuna look like, anyway?"

The world of Facebook confirms that cats from everywhere have been especially clingy this week. Kitten Thunder was no exception. When I sat, someone sat with me. On me. By my head on the back of the couch. With their wet nose in my ear. Or up against my nose for some EYE CONTACT.

When I went down to my work bench there was Thunder. But small scale Thunder that never went where they couldn’t see me. For a while, they were gone. Then I glanced into the spare room and saw the reflection of eyes watching from the bed. At one point Oliver came walking purposefully to where I sat in the banana chair, climbed into my lap and about broke my nose with the hug-headbutt he delivered. The Boy came down shortly after to make sure I’d been found – Oli had been upstairs wailing because I was lost.

For the past few nights, shortly after lights out, Oliver has started the “where did everyone go? Why am I alone?” cry on the main floor. I usually break down and call him. And remind him we’re where we are EVERY night. The ecstatic purr I get when he finds me just adds to how ridiculous this is.

Last night there was no yowling. Because Obi and Oli followed me upstairs to read.

And now? I left two cats on the love seat in the living room when I came in to blog. Obi is in the condo. He’s looking the other way, but I can feel him watching me with his flipped around ears. And Oli has moved four feet so he can see me by putting his head on the armrest of the couch.

I guess I should be grateful for the attention. I’ll miss it some day when Kitten Thunder doesn’t need their mama.

**A side note: Did you know the world’s largest bar made of solid jade is in Medicine Bow, Wyoming? SO smelling a road trip this weekend!

**A second side note: Since I said the word “Klingon” in my title I really wanted to say “Obi hates zebra cows” in that language. Why? Well, because it would be funny. And because Obi kept throwing a little plastic cow – don’t ask ME why he has stripes – off The Boy’s workbench this weekend. No translator will tell me how to say “Obi hates zebra cows.” So instead, I give you what he said to me when I paused in my metal working to tell him to get off The Boy’s bench: “mupwI’ yI’uchtaH!”

Spell check? Thinks I misspelled that.

This entry was posted in Attempt at humor, Cats, Jedi Skills, Oh please someone think this is funny, Uncategorized, woe is me. and tagged cat, cats, everyone needs their mama, kitten, kittens, love, not as good as Star Wars, stalking, Star Trek. Bookmark the permalink.

10 responses to “Cling On, Cats. Not to be confused with Klingon Cats.”