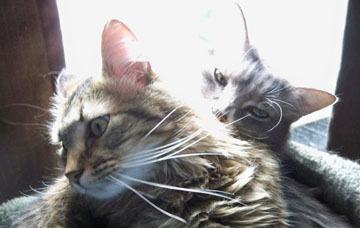 “The Girl has the camera again. Try not to be cute, maybe she’ll go away.”

There was exciting programming on OutTV today. The Boy was raking. Kitten Thunder found it fascinating. They paused in watching only long enough to run to me to tell me The Boy was on OutTV. Doing stuff. To the out.

I sipped my coffee. I could see him from the couch.

As predicted, Kitten Thunder has gotten over the neediness of last week. This weekend they are all about each other. They’ve thundered. They’ve snuggled in the condo. They’ve laid on the couch at the same time – though not together – and done the occasional laying down thunder. It isn’t really a thunder. Just two cats, showing each other their teeth and slapping each other in the face. Good game when there’s a good movie on.

Kitten Thunder’s blog officially has hundred of fans. That’s not a typo. One hundred regular readers. We appreciate you all. But it’s Sunday and I have some more quality time scheduled with the couch. See you Tuesday!

"Operation Dont Be Cute is a failure. Snap on, Girl, snap on."

This entry was posted in Cats, OutTV, Uncategorized and tagged cat, cats, kitten, kittens, OutTV, phoning it in, raking, yardwork. Bookmark the permalink.

4 responses to “OutTV, starring The Boy”