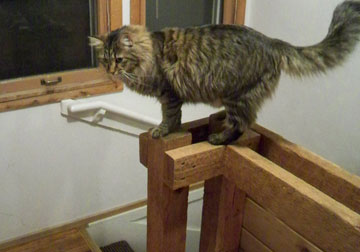 Our very first week in the new house was educational. In the guest room’s closet there are shelves on one side and one day, while I was holding him, Oliver wanted to get on those shelves. I didn’t think too much about it. I just set him on the top shelf and went back to unpacking.

And then…he was gone.

It didn’t take me too long to figure out that Oliver had climbed up into the ceiling. Luckily, he climbed up between two beams and there wasn’t anything but a long path to the foundation with a couple nails sticking up. I didn’t have to worry too much about his safety. I got up on a chair and talked to him until he was ready for me to help him down.

Since then, Kitten Thunder has been obsessed with the ceiling in the basement.

New rule: that side of the closet must remain closed at all times lest a kitten decide to get acrobatic.

A few days later The Boy  came up with a brilliant idea to make the shelves in another closet more shallow  so I would a) have more room to hang clothes and b) have a shelf that was the exact width of a sweater. I have an EXTENSIVE sweater collection. Have I mentioned that I live in Wyoming? And that winter is my favorite season?

Anyway, the shelves were made of two pieces of wood each so all we had to do was take the front piece off of the supports. The bottom shelf is still two pieces wide so there’s a nice platform. Obi was sitting on the platform as The Boy and I sat, huffing and puffing (I made the process sound much easier than it was), on the floor in the hall.

And then he did it. Obi had been looking at the open ceiling but I wasn’t worried about it – he’s not much of a jumper and it was a good six feet up. What I didn’t anticipate, though, was Obi’s amazing circus cat abilities. He used those shelf supports like the rungs of a ladder and zipped right up the wall.

This is where I discovered that I, too, have a special ability. When faced with the possibility of a cat going into the space between two floors of my house, I can move at the speed of light and snatch him back from the abyss at the nick of time! Ta da!

So…new rule. No kittens in the hallway closet, either.

A couple weeks ago, the clothes bar in the guest room closet broke. I maintain this is because of the cheap plastic fixtures and not because I have a ridiculous wardrobe. Stop! Don’t think back to the last paragraphs about me using the hallway closet! Don’t add that to the guest room closet! Cheap…plastic…fixture…no…such…thing…as…too…many…skirts…

While I was waiting for The Boy to fix my closet – the bar needed to be shortened and while I AM a metalsmith, I don’t do hacksaws – I moved those clothes to a spare clothing rack. Did I mention that when we moved to this house I gave away three closets of clothing to charity?

All of this part of the story is leading up to this: the other day, Obi was walking on the rack like a tightrope to get closer to a miller on the ceiling.

New rule: Don’t put the clothes rack near any open parts of the ceiling.

"Whatever you do, don't look down."