We provide our own siren.

Oliver has inverted sneeze, which sounds even worse than asthma when an attack comes. And since he can go months between them you can tell that Oliver is unsure what is happening. They are horrible. But they pass quickly. 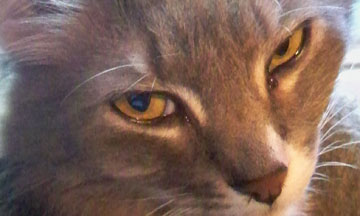 "This is the face of discomfort."

On Sunday, Oliver had an inverted sneeze. It didn’t last long. A while later he was in the condo and I went to take his picture. I noticed he was a little wheezy. Then, later that night, he started to cough.

The coughing came in spurts – one cough every 40 seconds or so for several minutes. Then he’s put his head back down and nap. By bedtime he was still coughing but between he was having trouble swallowing. Neither of us slept well.

I did the math and realized it’s been several months since we’ve been to the vet.

So we were due.

Oliver wanted to eat on Monday morning. This is a good sign. When he doesn’t want to eat we throw him in the carrier and call the vet on the way there. The grey kitten loves his food. Unfortunately, his throat hurt so bad that when I went back to the kitchen to check on him he was just licking the gravy off the food.

I dialed the phone. The vet had an appointment at 2:30 p.m., which I took and I thought in relief about how much cheaper that was going to be that squeezing him in on a “same day” visit.

I called back and told them we were on our way in. Oliver wasn’t so sick that he couldn’t scream his fool head off the entire way there.

They have another new doctor – he’s tall and seems to “get” cats. Oliver would have liked him had the new doctor not been trying to pry open his mouth to examine his throat. Next time, maybe.

And the verdict? Allergies.

He’s on his way back to fine. Prednisone, our drug of choice, for the allergies. An antibiotic just in case because he had a mild fever. 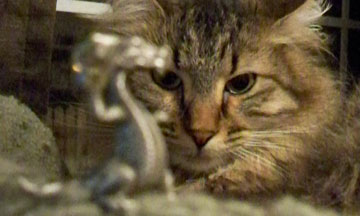 "Beware the dragon, for you are tasty and about to disturb the kitten's nap."

Why this picture? Because no blog is complete without Obi, right?

6 responses to “We provide our own siren.”