A photo essay: Helpful Cats in the Bathroom

In our house, if you don’t close the door tight when you go into the bathroom you get help. Lucky for me I wasn’t doing anything “personal” and could go get the camera. 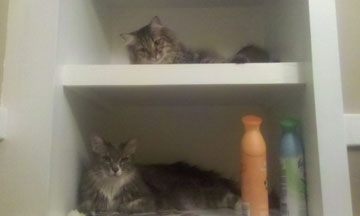 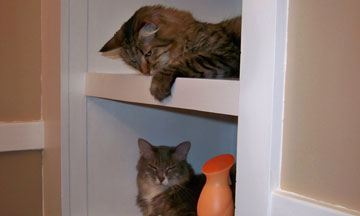 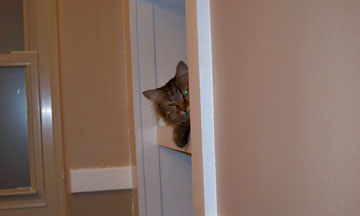 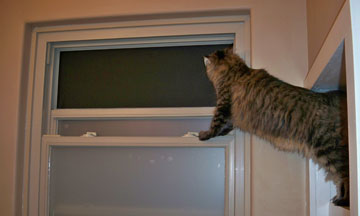 Posted in Cats, Oh please someone think this is funny, OutTV

A photo essay: The Breakfast Dance 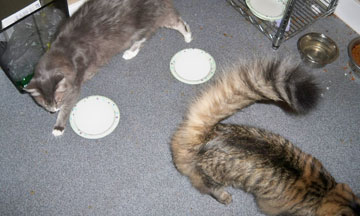 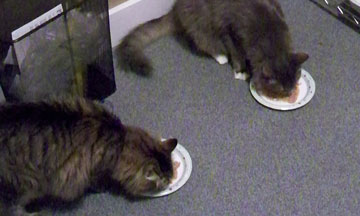 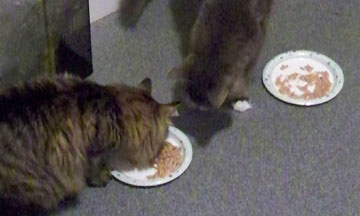 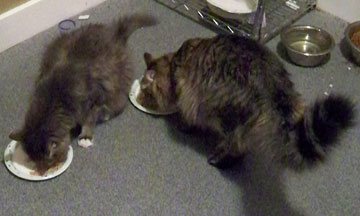 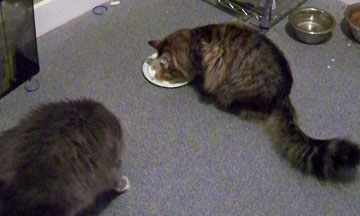 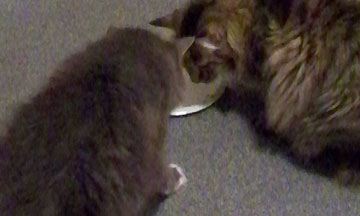 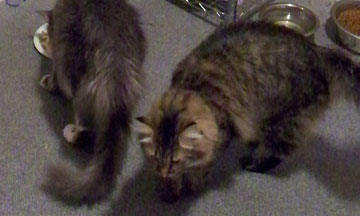 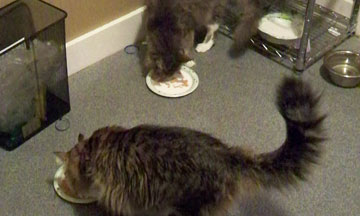 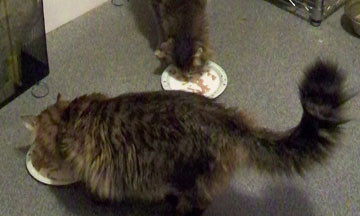 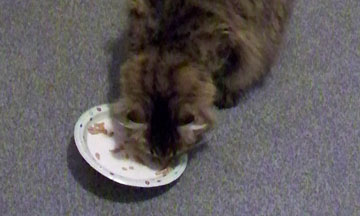 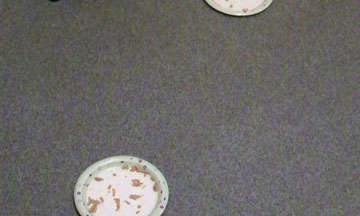 I got home tonight and took a deep breath. Ooh, did I miss a litter box cleaning? Why yes, yes I did forget to clean the litter box on Tuesday while I was sick and having to sit at my desk fighting Adobe over software. Stinky. And someone left me a gift outside the box to indicate their displeasure about my tardiness.

So I cleaned it.

Oliver came up to great me with goopy allergy eyes. He feels better but his eyes still get runny.

So I cleaned them.

So I cleaned it up.

Oliver, my poor put-down upon grey kitten, also has chin acne. He thinks it feels wonderful to have me scratch it with my fingernails. But then I have kitten zits under my fingernails.

So I cleaned them.

Finally, I sat down on the couch again. A grey kitten snuggled into my lap and looked up at me with the ultimate purr face. A brown kitten started kneading the couch behind my head. Then he bent low enough to give me a kitty-kiss on the temple before settling in for a nap. One brown paw rested gently on my shoulder.

Cats are awesome. And so worth it.

It’s Thunder Thursday! Today we bring you a kitten from across the pond. Kitalpha belongs to Holly of The Aluminium Foiled My Plans. Don’t worry about the mouse in the video. He wins.

Posted in Attempt at humor, Cats, Oh please someone think this is funny, Thunder Thursday, Uncategorized, woe is me.

"I've had a long day. Do we HAVE to blog tonight?"

Obi set up the perfect ambush for his brother today. It went a little like this:

Pick the bait: The Girl is going into the downstairs bedroom to change into pants. Oliver is sure to follow.

Pick the location: The wall juts out here in the hallway. I will wait for Oliver here and when he walks by, unsuspecting, I will pounce.

Oliver is coming down the stairs. Wait. The Girl is coming around the corner – she is already changed. She sees me, but doesn’t let on. Good Girl.

Oliver is walking down the hallway. Wait. He walks by. Um, lay down. Oliver walks around The Girl and they both walk by to go upstairs. The Girl shrugs at me and giggles.

Something went wrong. Back to the drawing board.

"Leave the dragon alone. I am basking."

Zensai is nearly ten years old and lately he’s been having trouble staying up on the flower pot he had for basking. Part of this is probably because he has scratched off all the texture. Part could be because he is old and it was hard to cling to a round pot. So this weekend The Boy, the grandpeople and I put our heads together and found this solution – a square pot. He seems to approve. Not that he would admit that.

My parents both have their birthday in August so we had ice cream cake. We don’t know why, but this afternoon Kitten Thunder decided my dad was the soft target. They both sat at his feet, watching and waiting for him to share, while three of us ate without a mooch. Perhaps they thought he should get to share since today is his birthday.

I hurt Oliver’s feelings this morning. He pestered and pestered in the early morning until I broke down and fed him. But then he kept on pestering. When I finally got up he was excitedly leading me toward the stairs. I snapped:

“I am perfectly aware that I fed you already, young man, and you’ve probably conned your grandmother into feeding you as well.”

Oli looked stricken. He dropped his tail and went back to the chair to lay down. Then I got downstairs and found out he hadn’t been down to see my mom at all. No conning.

I went up and got him. He’s quick to forgive.

Oliver is in a decorative box on the bed in my office right now. Obi is scratching his chin on the outside of the box. A white paw darts out of the box and whaps him in the face. Obi returns the whap. And scratches his chin again.

The grandpeople agree that Thunder Cafe provides some good OutTV.

While watching a squirrel eating seeds on the window sill, my parents suddenly found themselves starring on InTV when the squirrel turned to look in at us.

My dad was fishing for cat-fish, using a leather string to play with Kitten Thunder, when the grey cat-fish showed him why you should keep your feet on the couch while fishing. That cat has claws and thinks toes are tasty.

Oliver has won the battle of the decorative box.

A letter from Kitten Thunder

We have come to realize, after watching The Girl and The Boy steadily clean the house, that you are coming to visit. While we’re happy to have you here, please excuse the people from any more cleaning. We do not like it.

The Girl has been putting away the clothing that makes our comfy downstairs napping spot on what she calls “the spare room bed.” We find her justification – that you’ll need someplace to sleep – to be suspect. We have at least twenty other places in the house that you can sleep. Have you ever considered the window sill in the reading nook? The sunbeam on the floor in the kitchen?

The Boy’s actions are even worse. All summer we’ve been pushing out extra fur and forming it into clumps which we’ve stored in the corners, along walls and on the staircase. We were so close. Just one bolt of life-giving lightning and we would have had a complete set of minions. Obi is ready to move into management. How are we supposed to move him up without minions? Sometimes people just don’t think.

And now, a word about breakfast. We don’t like to complain, but The Girl doesn’t feed us. And worse, she’s done a good job of convincing The Boy that she does. So while you are here, please feel free to open as many cans of cat food as you’d like. When she does feed us, The Girl gives us two cans each.

And one in the afternoon.

And some tuna at midnight.

Please don’t feel like you need to tell The Girl when you have fed us. She’s accustomed to us fending for ourselves.

Thunder Thursday! This is my friend Jacob’s new kitten, Duc. 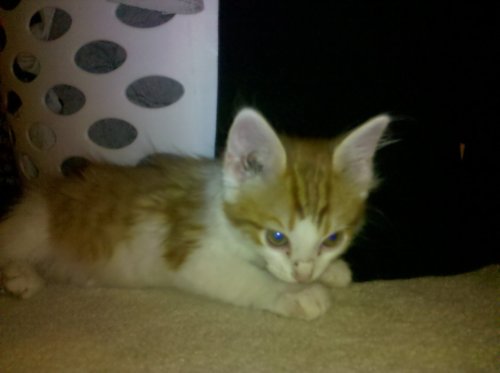 Posted in Cats, Oh please someone think this is funny, Thunder Thursday, Uncategorized

Oliver is feeling better. For a while his newly found allergies were slowing him down and he wasn’t as active as he usually is. Poor Obi. But, while still a little goopy around the eyes and nose, Oliver is now better.

He is instigating Thunders.

When Obi wants to thunder, he’ll do the things a normal cat will do. He’ll sneak. He’ll pounce. He’ll tease and run. Oliver…well…did I mention that I was the one who taught Oli how to be a cat? Chalk this up to another failure on my part.

When Oli wants to thunder, he’ll walk up to Obi and poke him in the face with his paw. There’s a possibility he’s trying to give Obi The Claw. The Claw is slightly less effective when you have tiny paws nowhere near big enough to encompass a cat’s head.

But then! Then we have Oliver’s signature move: The Amazing Ninja Tail Spin!

Once Obi is standing, Oliver spins around so he is facing away from Obi. He looks back over his shoulder to make sure his brother is impressed by his awesome move. And Obi is…confused. We think that Oliver means to smack Obi with his tail, but Oli holds his tail straight up at all times. So no tail smacking. Or twacking. Just…butt.

In all fairness, this move does have a pretty good consequence depending on the goal. Once he has spun around, Obi usually bites him. The Girl or The Boy generally responds with “Obi! Don’t bite your brother’s butt.” So…Obi is in trouble. Oli wins.