This week I have been out of the house for quite a bit to attend the Wyoming Governor’s Conference on Tourism and Hospitality. It was great fun renewing contacts and seeing my friends from the tourism industry. Kitten Thunder did not approve. You see, I work at home now. My place is at the desk. And I’m needed to turn on the space heater.

Despite their objections, I attended all day today and only returned to the house in the afternoon to change for this evenings banquet. Kitten Thunder put aside their feelings about the issue and accompanied me downstairs to supervise.

The closet doors in the room where I get dressed are full length mirrors. Obi ran into the closet through a slim opening. He lost Oliver, who had been pursuing him. You see, this handsome grey kitten confronted Oliver as he neared the door. He was SO handsome. So handsome that Oliver had to sit down and appreciate the beauty of this kitten. Oli was flattered, because this stunning grey cat seemed to think Oliver was handsome as well.

The grey kittens sat there.

Until a brown paw shot out of the closet and punched both of them in the nose.

Reverie over. Thunder on.

I was working out in the basement this week. After half an hour on the stationery bike, I headed to the floor for sit ups. A comforter was bunched up to the side – something we sit on once in a while. I didn’t think anything of it as I started with the sit ups. Then I did some bench presses with my dumbbells. As I lowered my weight down to the comforter, the blanket squeaked. Obi had managed to crawl into the pile of blanket.

We don’t get why he keeps talking if he doesn’t want attention.

I was taking a shower yesterday and Obi started crying on the other side of the curtain. I looked outside to see what he wanted.

The noise has subsided here in the Thunder household. Oliver, upon hearing that we need to take his temperature tonight, has disappeared. Obi is taking advantage of this opportunity to sneak in some solo snuggle time with The Girl.

Its a lovely Sunday night.

Here’s the picture I wanted to post on Tuesday, of Oliver in the check box. My phone decided that, of the three pictures I emailed to my computer, only the one of Obi was important so the two of Oli didn’t arrive until four hours after I wrote the blog.

So now, in the ongoing story of Oliver, his fever and his limps:

About two weeks ago, Oliver started limping again. The thing is, though, that this limp doesn’t look like his fever limp. And Oli has put up with almost daily temperature readings since he started limping to assure me that he DOES NOT have a fever. Plus, he’s still on drugs.

Another thing: he doesn’t care that he’s limping. He eats. He plays. He instigates thunders. Whatever pain is causing him to limp isn’t keeping him down at all.

So that’s why I – she who accused by practically everyone of spoiling her cats – did not call the vet for two weeks. But on Monday, Oliver and I were having a serious snuggle fest. He was laying on his back between me and the couch, feet in the air. I was playing with his toes and noticed that one of his toe-pads had been damaged at some point and is healed kind of weird.

But…he is limping on the passenger side. Today he was even holding his right foot up. Grr.

We just returned from the doctor. After talking to me and telling Oliver how very handsome he is because yes he is so handsome such and handsome little man and oh so fluffy, Dr. Glick took him to the back room to see if he would walk for her. I waited in the exam room. I knew he was back there either not walking or not limping. Perhaps, as a friend on the Book of Face suggested, he was doing a little limp-free dance to show that I am delusional.

He tried not to limp in front of the doctor. He failed.

When she came back, she talked about his degree of lameness. He took that personally.

Since Oliver has decided that the best course of action at the doctor’s office is to be a jerk to everyone right off the bat and to growl, hiss and resist everything they do, an X-ray would have required sedation. Plus, almost anything we’d find in the X-ray would be treated with a shot of painkiller. So we skipped that whole rigamarole and just got him the shot.

And now we’re back. Obi is giving Oli a bath on the couch and they are both giving me the silent treatment. If I hear the pitter patter of four little feet tonight instead of the thump thu-thump of the limper, though, it will all be worth it.

Update! Four hours later I have no limping cats. Yay!

Oh go0d, Obi has forgiven me just in time to blog. He’s trying to kill the mouse, which he does regularly and with great precision. Then I have to spend five minutes resuscitating it. Now I’ve got the mouse in my lap and Obi is pushing buttons. The volume on the compute is all the way up. All drives have ejected. Number lock is on, off, on, off, on…

It’s Thunder Thursday! Have you seen the fuzzy adorableness that is my Pinterest board lately?

By the way, if you are interested in following “the business,” you can! My site includes a blog which will be updated regularly with my thoughts on all things social.

Posted in Attempt at humor, Cats, Oh please someone think this is funny, Thunder Thursday, Uncategorized, woe is me.

The checks for my business arrived last week. I just keep getting officialer and officialer. Since I’ve got a handy dandy debit card, I got big checks in a big ledger in the hopes that I won’t lose them like I have the five personal checkbooks that are somewhere in this house.

The box the checks came in is the perfect width and length for a grey-sized kitten. It also happens the be the perfect depth for resting a chin. Of course, this type of perfection means that Obi, too, wanted to be in the box.

And the battle began.

It was a ferocious battle, with Obi leaping onto Oliver and Oli linking arms with the brown kitten. He’d use the leverage from the arm linking to throw Obi three feet across the room. Obi would roll, recover and return. They played like this for hours.

Shortly after The Boy came home from work to meet the perfect box, the box became even more perfect. Kitten Thunder rolled over one edge of the box and tore one of the walls free.

It has been five days since the perfect box arrived. Alas, the box is now just a flat piece of cardboard. Hour upon hour of wrestling has torn and worn it level.

Perfection, it is fleeting.

"A photo of me doesn't have to be relevant. It just has to be cute."

The process would repeat as Oliver would come toward me, “unsuspecting.”

After forty minutes of this game it came to an abrupt stop. Oliver was breaking away from the rug wrestling.  He chose to use the cave as his escape route. Obi leapt toward the opening where Oliver would exit – right into the sharp corner of the coffee table. He hit the corner with his temple and the top of his eye.

Oli swung around in concern.

I asked him if he was okay. Obi, eye closed, took off. The Boy heard the ruckus and found me as I was dragging the brown kitten out from under the dining room table.

We gave Obi a full exam. By that time his eye was open and looked okay. His temple seemed okay. I treated it with Girl kisses. Then we asked him how many fingers I was holding up. He sniffed them and said “cranberry juice.” Once again, the question of how long a concussed kitten should stay awake was raised. We decided 20 minutes would do.

A little while later I was back on the couch when Obi came into the room. Cautiously,  he approached the table. He sniffed it. Then he marked it with a chin scratch. No hard feelings.

Obi jumped up for a foot snuggle. Oliver finally made it to the couch as well. He settled down by the cave monster, kissed his head, and concentrated on some high quality purr therapy.

A couple IQ points is a small price to pay for such a great scene on a Sunday.

Posted in Attempt at humor, Cats, Oh please someone think this is funny, Purr Therapy

There was a brown kitten…

There was a brown kitten who found him a fly.
I dunno why he could find that fly,
It’s not July.

There was a brown kitten at the top of the bed,
He wiggled and jiggled and pounced up beside us.
He’d run to the bed to catch the fly.
I dunno why he could find that fly,
It’s not July.

There was a brown kitten who batted lamp shades;
What a delight, to fight with the light!
He batted the shade after jumping on the bed;
He wiggled and jiggled and pounced up beside us.
He’d run to the bed to catch the fly.
I dunno why he could find that fly,
It’s not July.

There was a brown kitten who slapped The Boy;
He slapped, I guess, at the fly but he missed!
He slapped The Boy after batting the shade;
He batted the shade after jumping on the bed;
He wiggled and jiggled and pounced up beside us.
He’d run to the bed to catch the fly.
I dunno why he could find that fly,
It’s not July.

There was a brown kitten…
He caught a fly…
No kisses for him…
‘Til some time goes by.

It’s Thunder THUNder ThunDER Thursday! Today? Some LOL cats that made me giggle. Yes, I KNOW one of them isn’t a cat. 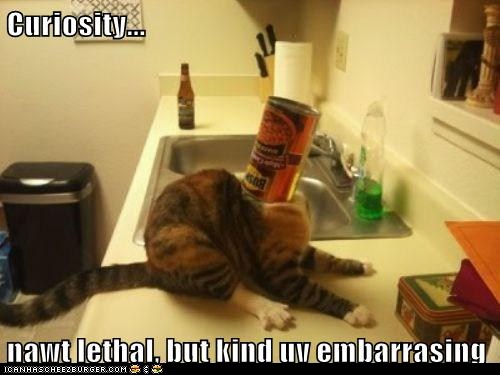 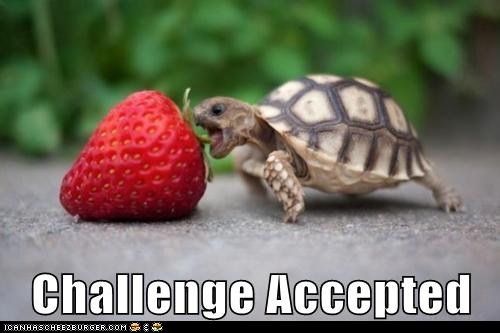 Posted in Attempt at humor, LOL, Oh please someone think this is funny, Thunder Thursday, Uncategorized

The Boy and I don’t really celebrate today’s holiday, fondly called Single’s Awareness Day in our house. But Kitten Thunder got extra love.

It started at lunch time. I woke up this morning with dark circles under my eyes, so dark it looks like someone punched me. By lunch I was melting. It was definitely time for a nap. Oliver was happy to help.

Back at work this afternoon, Obi snuggled in my lap. He was laying on his back with his feet in the air so I could rub his belly. At one point I realized he was late for the afternoon nap. When I looked down, though, he was snoozing with his chin on his chest.

The Boy came home from work to find Oli and I under a blanket on the couch. More snuggle for the grey kitten.

Three naps later, I am still tired. Stupid cold. But Oliver thinks this will end up being the perfect wrap up to the holiday. Nothing says love like fuzzy pajamas and calling it an early night. That, and a furry purr face.