We value your patronage…

…but I have a cold and I had to be on the road at 6:30 this morning to get to a conference in Denver at 8:30.  I am tired. Please enjoy these videos from Simon’s Cat.

Posted in Attempt at humor, Cats, LOL, Oh please someone think this is funny, OutTV, woe is me.

The Thunder household lost a family member yesterday. Zensai, my bearded dragon, died at almost 12 years old. Oliver and Obi knew first and started acting really weird. I feel bad because I attributed their behavior to The Boy going away for a model railroad show this weekend. I scolded them for the senseless yowling in the corner of the living room. Now I know what they were saying. 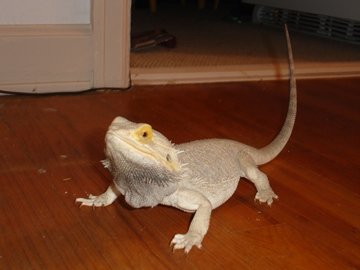 I buried my bearded dragon under some bearded irises in our yard. Not only is it a fun play on words, but they happen to be my favorite flowers and they can be planted in October. Hopefully they’ll come up with super beard power next spring.

It is weird, today, to be in the living room without the gigantic lizard tank. Both cats are super snuggly – like Obi actually slept in my lap for a couple hours. There is a whole bunch of empty wall and floor back there that needs to be filled. Plus I had to turn on a light because the box of light is gone.

So…there’s no way to turn this into a funny post. We’ll come back on Tuesday will something cute or funny.

Thanks, Zensai. We had a good run. 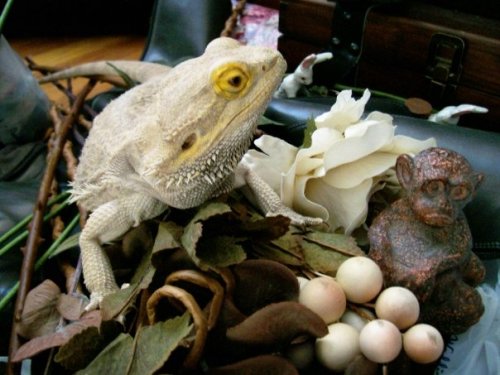 Posted in Cats, Purr Therapy, Uncategorized, woe is me.

The Boy and I were in California for seven days. Since returning, I have been very well supervised. As was the window guy who came to give me a quote this evening. For one thing, he brought an awesome bag thing with window parts in it.

Obi wanted in the bag something fierce. I kept picking him up and holding him in my lap. Then he’d walk off. Next thing I knew he was in the bag again. Lap. Away. Bag. Lap. Away. Bag. Eventually he’d reached his limit for snuggle time and started biting me. He was sent away with a swat to the bottom.

The second he was gone, Oliver walked in and started trying to get into the bag. So he was on my lap. Obi came and sat on the window guy’s worksheet.

This was after both Oliver and Obi helped us discuss the windows on the cat shelf. They were in his face, on his workbook, playing with his tape measure…and they followed us downstairs to discuss the windows over the train layout. Obi liked that – he was at shoulder height with window guy.

I did apologize to window guy for the attention he was getting. It occurs to me that he might be wondering why I didn’t lock up the kittens. I know why. Two kittens locked up would be loud. And distracting. And traumatizing to the kittens who have not left my side since we got home on Tuesday.

It’s Thunder Thursday! While we were in California, we visited some kittehs that helped us get through the time without our fuzzies. 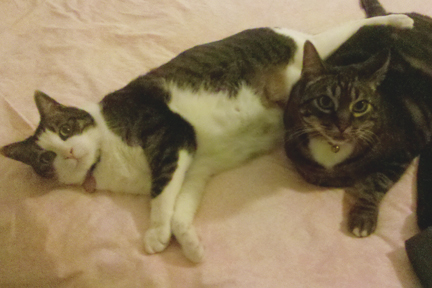 Benjy and Freddy hosted us in Monterey. There was a lot of belly rubbing during the two days we were there. Benjy even met me at the bathroom door in the middle of the night and informed me that I could pet him for half an hour before going back to sleep. He accommodated me by going back to the bed so I could lay down. 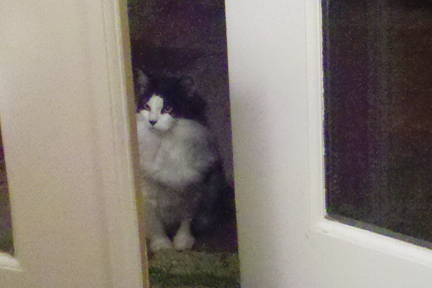 Lacey, in Redwood City, was not too interested in hostessing. She watched us. From afar. 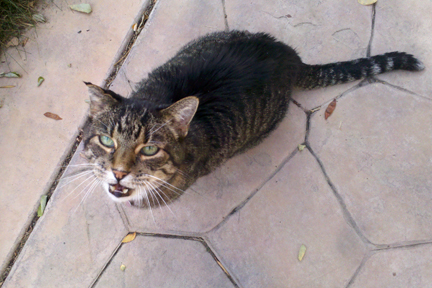 Lacey’s brother, Chuck, was more active in his hosting. Or in his attempt to turn us into slaves. He has the tell-tale yowl of an older, deaf cat that reminded me of Poco. At least, that’s why I think I picked him up every time he asked. We’re pretty sure we spoiled him rotten and he is now insufferable. 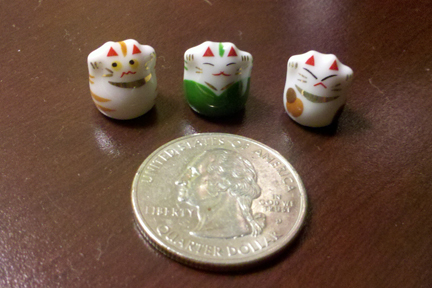 And then, in China Town, I found these itteh bitteh kittehs. We adopted them and brought them home.

Posted in Attempt at humor, Cats, Oh please someone think this is funny, Thunder Thursday, woe is me.

Confession: The Boy and I have been on vacation for the last week. I bought some cheese flavored treats for kitteh (and dragon!) sitter Lori to bribe Obi with.

But Obi decided he does not need Lori’s help. 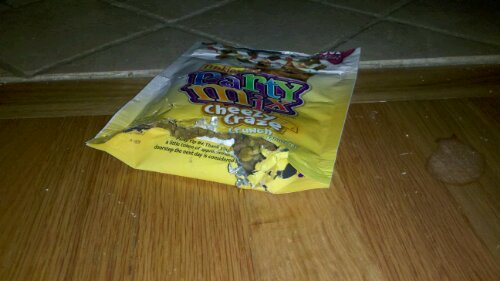 We’ve decided to stop leaving bags of treats on the coffee table.

Nothing But, Lizard Butt 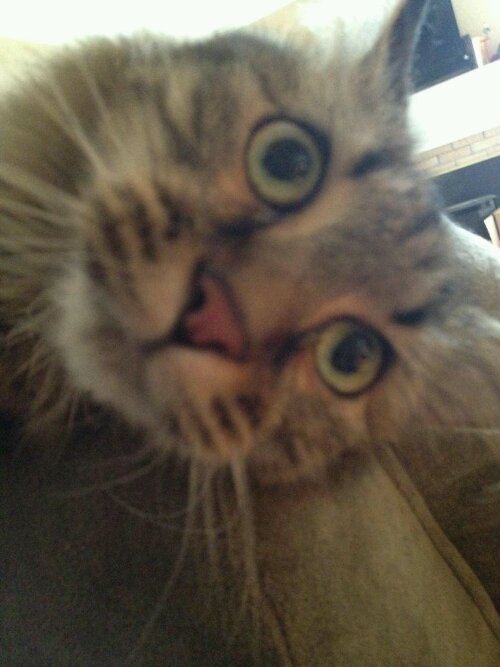 Hey, Zensai, what are you doing in there? 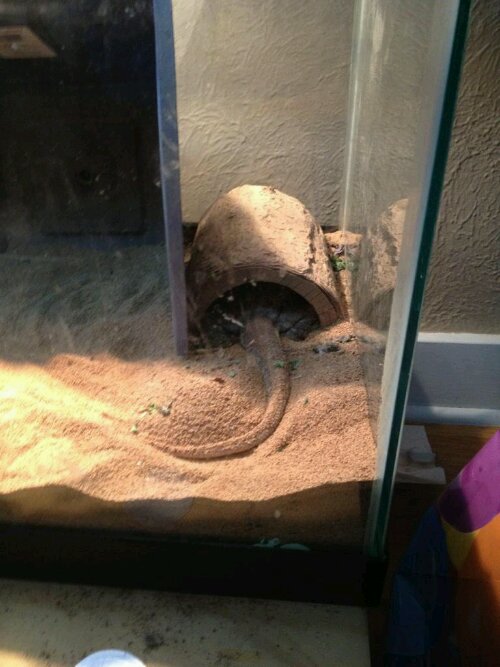 Nothing. Leave me alone.

This is all I’m writing today. Please enjoy this blog intermission from http://icanhas.cheezburger.com: 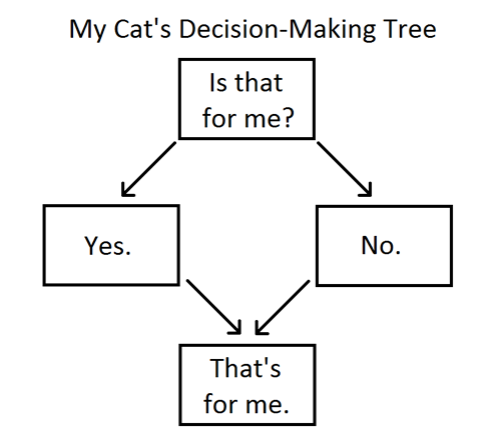 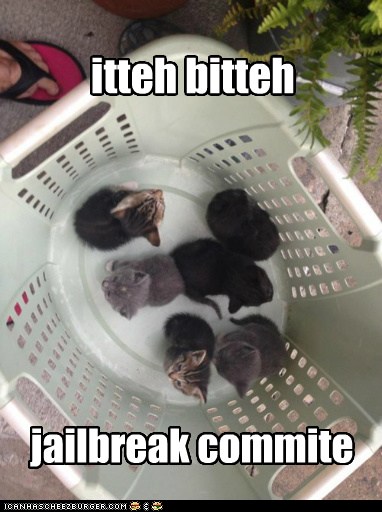 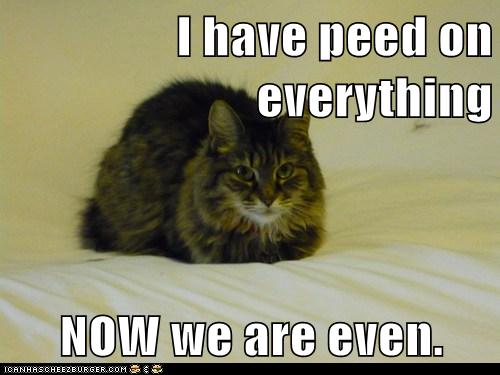 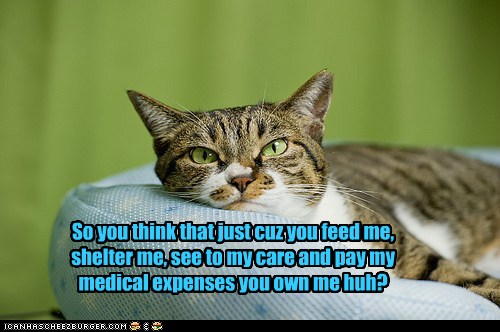 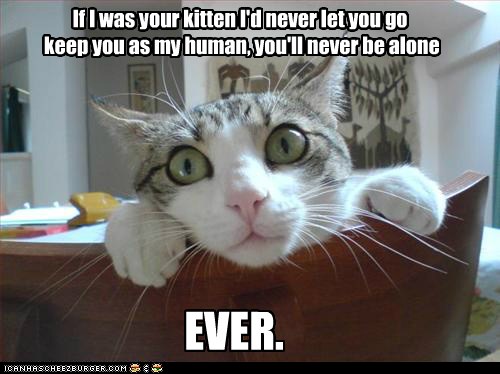 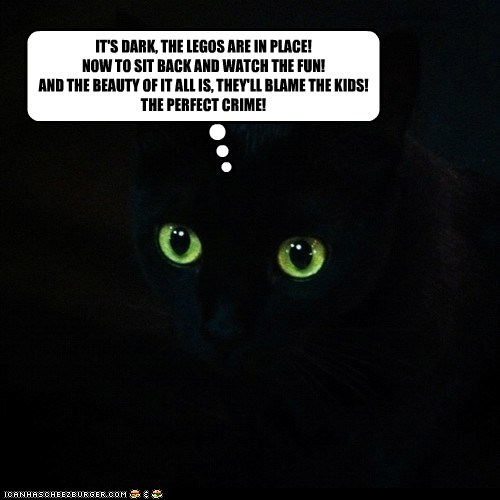 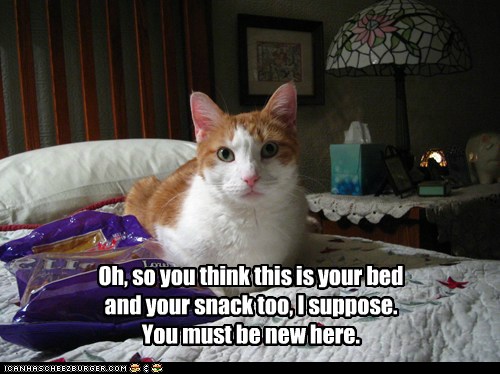 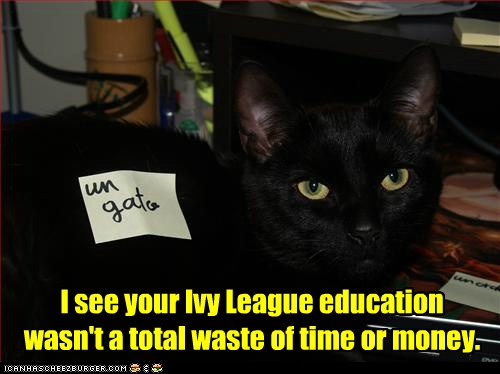 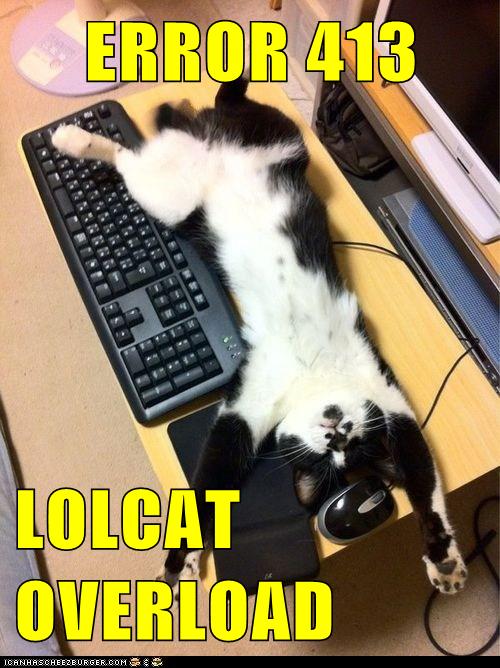 Prior to staying at home and petting kitties all day, er, um, I mean WORKING at my own business, I worked for Wyoming’s department of tourism. It was pretty fun – who wouldn’t want to talk about Yellowstone and the Red Desert and Devils Tower and Cheyenne and points in between all day? But there was one problem.

The office has now moved to the state’s border.

Anyone who knows me, though, has heard the story about how when I worked at the chamber of commerce and they closed 15th Street and ruined my life. They put up one blockade and suddenly my morning commute went from three minutes to five minutes. Dude. NOT okay. And it has just gotten longer and longer and longer. The old tourism office was TEN minutes away. The new one would be TWENTY.

So, obviously, I had to quit before the move happened.

The new office had its grand opening on Friday. It is very nice. If you happen through Cheyenne, it is worth a stop. And not just because you can see my name in print on an interpretive sign at the top of a berm. 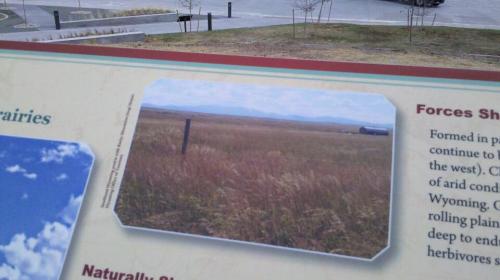 My name, a permanent part of the Wyoming landscape, in a photo credit.

But more important than my photo credits is the swag. I got myself a new travel coffee mug that is much bigger than my chamber of commerce travel mug. And some posty notes in a leather case. AND AND AND…chocolate. The chocolate came in a golden box with one of those golden stretchy strings tied in a bow.

There’s not much Oliver likes more than loops of stretchy string.

This was one of those rare instances where Oliver had more fun with a toy than Obi. Oli’s string jumped, and leaped and ran across the house for a solid hour. It eventually was lost under the door of the main floor bathroom. Obi’s? It is still on the rug. Sitting. Waiting. I did pick it up once and fling it into a box. That made it interesting.

Today, while pulling things out of my closet, we found a golden loop in a suitcase. Now THAT one was fun.

The weather has turned colder which means the furnace is on. I am enjoying my large sweater collection. The blankets are out. And Kitten Thunder is wearing their warm clothing…namely, each other. 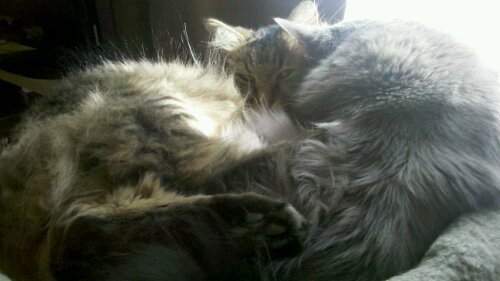 Yesterday we received a shipment of little pieces of something model train related. I don’t know what they are, but I do know that The Boy was getting really antsy about whether they’d get here in time for the club to finish their project before the next show. By the way…model trains is not a good hobby if you are impatient. His shipments take weeks to get here and are often late. Like MONTHS late.

But that’s not important. What is important, of course, is that the shipment came in a box. 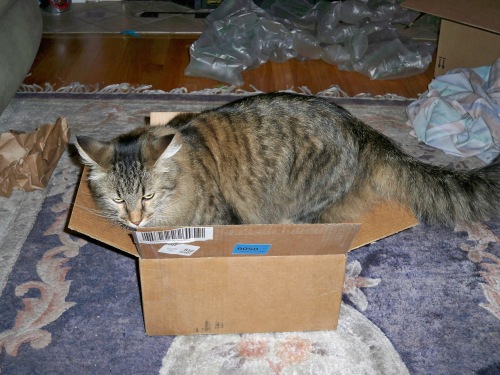 Obi fits perfectly. Oliver has not even tried to get in this box, but he did chin mark all the flaps while Obi was sitting in it. Then Obi punched him in the eye.

Right now the box is on its side, facing the big box of plastic intestines (also on its side) with the fort blanket draped over them. I didn’t wait to watch, but I can hear Obi playing.

Earlier tonight, right after work, The Boy  was rubbing Obi’s belly. Obviously. When Obi was back on his feet, The Boy grabbed the box, flipped it upside down, and set it on top of the brown kitten. Turtle monster. Because of the flaps, Obi could turn around without moving the box. He kept turning and looking out from whatever flap The Boy wasn’t looking in. Then he stood up fast and the box flew off him.

He turned to The Boy…

It is Thunder Thursday and I bring you this simple truth from the world of Facebook, my friend Nikki, and George Takei. 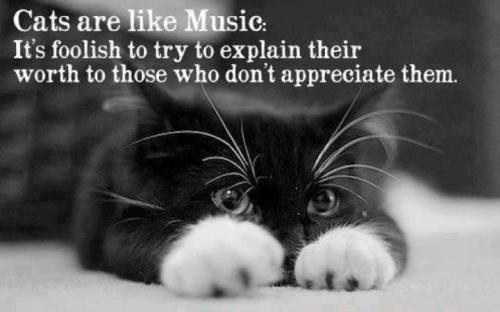 Today The Boy and I made our first venture into Indian cooking with some left over chicken and a whole bunch of spices. None of those spices, I might add, are the three new containers of Indian spices that I bought last week from vague recollections of recipes I had read. So now I’ll be looking up recipes that specifically call for curry, turmeric, and coriander. Woe is me.

As I was mixing the marinade for our masala, I was having a pretty awesome day. And then I started to pull chicken, left over from Sunday’s dinner (a story in itself), from the bones and dropping it into the marinade. Just as I reached the point of no return – and no stopping – I realized that I’d forgotten to pick up our vegetables from the co-op. And I had half an hour. I put my poultry picking into overdrive.

Meanwhile, Obi was circling my feet and crying. Wouldn’t I please give him some chicken?

Then I was off! Luckily, the co-op is at a store that is only ten minutes away from my house. I had time to get there, gab with the ladies at the store, load up my veggies and get home before my time was up. While I was gone, The Boy came home. He put away veggies.

Then I put him to work.

While The Boy finished cooking the masala, I found a quite respectable amount of chicken left on the bones. I picked it all off and made a pile on the two plates in the breakfast nook. I called the kittens. Since The Boy and I had said “tuna” about forty times in the last ten minutes, Kitten Thunder was a little surprised to find chicken on their plates.

But it was ear licking good.