The Boy and I were gone over Christmas. We left Kitten Thunder alone, with kittensitter Lori keeping them full and happy, for three days. It. Was. Traumatizing.

We’ve been back since Wednesday, but I am under heavy supervision to make sure I don’t try to go away again. 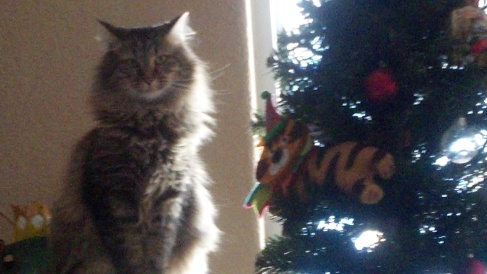 Lucky for me, my parents gave me brand new work shoes – perfect for my job of trekking from one Facebook page to another.

Oliver is using his own strategy to keep me home. It’s called “hold The Girl down on the sofa and shush her whenever she suggests she should get up.” The short name for the strategy is Super Snuggle.

Also, Oliver is not impressed with my fuzzy feet. He has four of his own.

After days of sitting in the car and sitting around with the family, eating things that are only eaten at Christmas, I am putting my workout as a priority over this blog tonight. Oliver thinks we should be laying on the couch.

BUT!!! It is Thunder Thursday so I present you with my favorite Christmas flavored LOLs from this year, courtesy of the Cheezburger purveyor. 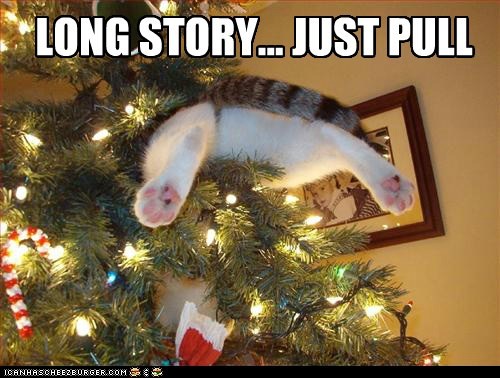 We have also added the pins to the Pinterest board, if your fancy would be tickled by such things.

Posted in Attempt at humor, Cats, Exercise, LOL, Oh please someone think this is funny, Thunder Thursday, woe is me.

The other day I was at a local coffee shop and the girl there gave me some expired muffins to take home for the neighborhood squirrels. I asked Kitten Thunder where we should put them.

Out the front window, said Oliver. 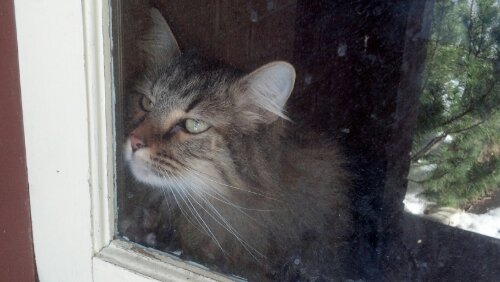 Out the front door, said Obi.

And so we did.

Tubbo watched from the tree.

It didn’t take him long to come down and try out the blueberry muffin. 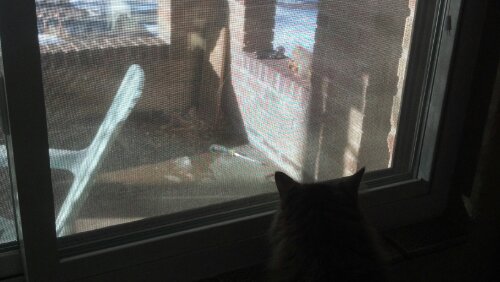 Obi and I were thrilled to see him enjoy the Christmas treat. Soon after, though, he decided to take the muffin home with him. He carried an entire muffin up the side of the house.

Then he came back for the other one.

Someone needs to re-explain the term “taking the bait.”

Merry Christmas from around Wyoming!

Danger on the Horizon

The farmer has been concerned about his livestock. Every once in a while he walks out of his house to find his cattle wiped out. Ten head of cows, left to rot on their sides in the yard.

The pigs have also been victims of this strange phenomenon.

Fed up, the farmer grabbed his rifle and stood guard. He left one dead cow at the corner of the house to attract whatever was attacking the livestock. Finally, a lion came by. A tiny fellow, this lion sniffed at the fallen cow.

Feeling that the mystery was solved, the farmer raised his rifle to dispatch the threat.

Little did he know, the real threat hunkered on the horizon…

Wyoming finally got some real and true snow this week – about seven inches of snow overnight here in Cheyenne. It inspires…snuggling. It inspires…creative reasons to not go outside to work meetings. But I did go to those meetings and left Oliver alone under the quilt on the couch.

When he got up to go upstairs for his afternoon nap, the quilt slid partially off the couch and created the best phenomenon EVER.

The fairly rigid quilt met the edge of the sheet cave and Obi was able to run from one to the other quickly. This meant that he could watch for someone unsuspecting to come his way from the quilt and then attack from the sheet cave. This is so much easier than sitting still and focusing from inside the sheet cave, using sound and feel to decide when to attack.

Oliver is very good about being “unsuspecting.” He’ll walk by several times if that is what it takes to get attacked. He’ll even go over on command if he doesn’t realize that Obi is waiting and we ask him to: “Oli, go be unsuspecting for your brother.”

Today, Oli was unsuspecting over and over and over and there was much in the way of Thunders. Then, suddenly, I realized the Thunder had stopped. I found the brothers upstairs, napping in a pile of fluffy on the bed.

Just as I suspected. 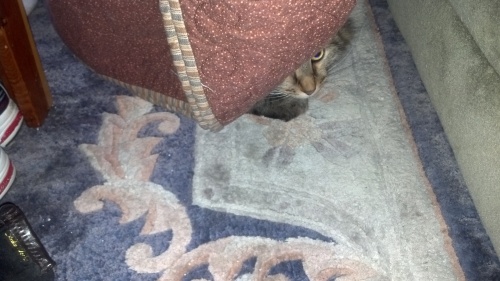 It’s Thunder Thursday! Today, a call for photos. Leader Otis, from the Cult of Otis, is calling for photos of your cats enjoying boxes this gift giving season. You know, those boxes that used to hold presents for your cats. Presents they’ll forsake for the cardboard box in which it came.

If you have a picture for them to share on Box Day, send your contribution by 3 p.m. on Christmas.

Late breaking addition! DUDE! The Aluminium Foiled My Plans has posted a blog! Baby pictures – ALL THREE TINY TOTS – and their first tree.

What’s in the Box?

Obi and I have been eagerly eyeing the box on the dining room table for several days. The Boy, I’m assuming more oblivious than malicious, has not opened it. And he has left it sitting there. Taunting us. For. Days.

Suddenly I was a kid again, painfully awaiting the time when I would be allowed to open the box. My Christmas present.

Finally, today, The Boy told me that I could open the box. Obi immediately took his portion of the present. 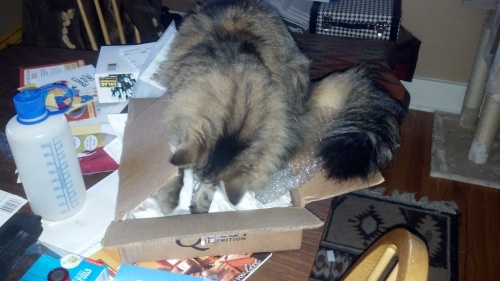 And I took mine. Down to the courthouse. Where The Boy and I got married today. 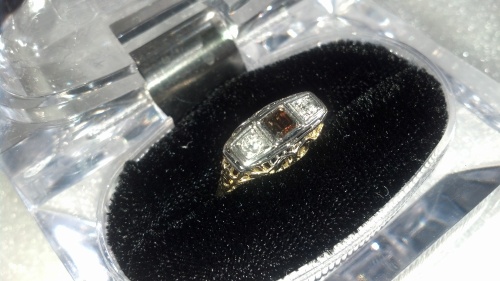 Oliver says he’ll take The Boy’s last name, but I am NOT to hyphenate it when he is in so much trouble that I use his full name.

Obi just wants to make sure he gets to keep his box.

Resolved: The Girl ought to spend more time at home

This weekend I volunteered to judge a speech meet for one of the local high schools. As a former Lincoln-Douglas debater, I have a skill that is much coveted by the current debaters. There is nothing quite as horrifying as a judge, however well meaning, who is unfamiliar with the event.

I left the house at 2 p.m. Friday and got home just before 10. Then I started Saturday out right, in Oliver’s opinion, by getting up and feeding him at 5:30 in the morning (shudder). Then things went terribly wrong for the grey kitten.

I did not go back to bed.

I did not lay on the couch and watch movies with him all morning.

Instead, I got dressed and returned to the speech meet. I didn’t return until it was time for The Boy and I to go out to dinner. When we returned, I went directly to my office to finish Tidbits for the week.

When I finally got to the couch it was almost bedtime and Oliver offered his own resolution: that we should sleep in on Sunday and spend all morning snuggling.

I stood in firm affirmation of this resolution.

My grey kitten and I did sleep in. Then we stayed in bed and he let me rub his foot like a lucky rabbit’s foot while I finished my book. Obi joined us for a nap. It was midafternoon before we left the bedroom.

And it was wonderful.