Affront to the Back

The Boy was walking to the belly rubbing rug. His focus was on the brown kitten waiting for him there.

The Boy, his focus still on Obi, went after his to see if he was okay. “Did I step on you, buddy?” He picked Obi up to check for damages.

Meanwhile, Oliver was unnoticed by The Boy. The grey kitten returned to the living room and fixed The Boy with a hard, angry stare. “Um,” I said, “I think it was Oli’s tail that you stepped on.”

The Boy turned and saw the glare. Setting Obi down, The Boy went after Oliver to apologize. But Oli? He doesn’t make forgiveness easy. He ran under the dining room table and turned to make sure he was being followed. The Boy, dutiful, crawled in after him.

And there, beneath the table, my three boys made friends again.

I stayed on the couch. It is safer that way. 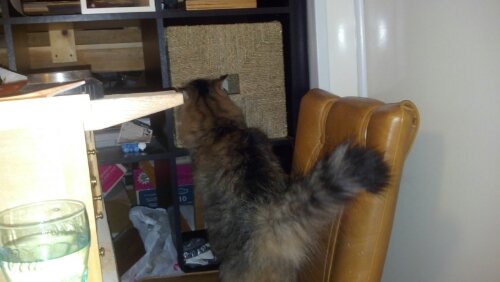 Obi is helping me in the workshop tonight. He thinks we should use tubing. It is in here. In the delicious hemp box.

The farm has met with disaster – Winter Storm Obi. Again. The giant cow and giant dog have been knocked into the ravine. That’s what the get for considering themselves giants in Obi’s world.

And here’s a picture of Oliver sleeping. I’m sure that is what he’s doing upstairs.

2 responses to “Affront to the Back”