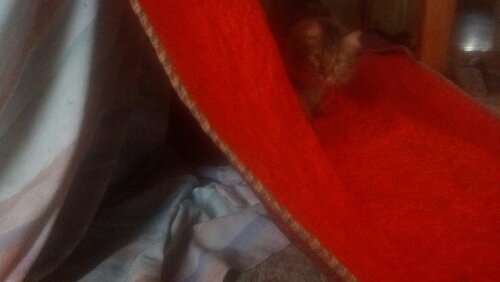 As you know, Oliver had a doctor appointment on Monday for his out of control allergies. They are now, officially, under control. His eyes are not goopy. His lungs are not wheezy. His chin acne is clearing up.

The one ear was infected so Oli is getting ear drops. They are much harder to give because I have to put the dropper into his ear and try to tell if anything has dropped in while my grey kitten tries to get the dropper out of his ear. At least eye drops you can see if medicine is coming out. At least pills are a solid.

Evidently, ear drops are tasty. This afternoon, Kitten Thunder was in the condo. A bath started. There is really nothing cuter than the two kittehs washing each others’ faces. With their faces clean, Obi moved on to the top on Oliver’s head. That would include his ears.

Ears so tasty, it seems, that Obi really got into the cleaning. It required putting Oliver in a headlock. Then standing on top of him. And shoving his face all the way into the grey kitten’s big bunny ears.

I don’t know if his ears were really tasty. There’s a possibility that Obi was just taking care of his brother. He does that.

But the ears are sparkling clean.

For Christmas, my aunt gave me this squirrel feeder. It is hilarious. And hard to photograph from inside the house.

This entry was posted in Attempt at humor, Oh please someone think this is funny, Thunder Thursday and tagged allergies, brothers, cats, cute, funny, kittens, squirrels. Bookmark the permalink.