Obi is working on becoming less mellow. He is NOT up for anything. So next time someone comes up with some bright idea about photos and activities and open spaces and dogs, I should just say “sorry, I have cats and they are not game for such shenanigans.”

Last year it was board photos in a park for Cheyenne Animal Shelter.

He did not approve.

Last week, Dr. Tiffany from Cottonwood Veterinary Clinic sent out an email about the new office. They were pouring new concrete and wanted patients to come out their paw prints in. “Obi could do that,” I thought. We were the first call for an appointment.

On the drive over, all six blocks, obi complained. He did NOT want to do this. He was NOT okay. This WAS a big deal.

Then he made a couple perfect paw prints. 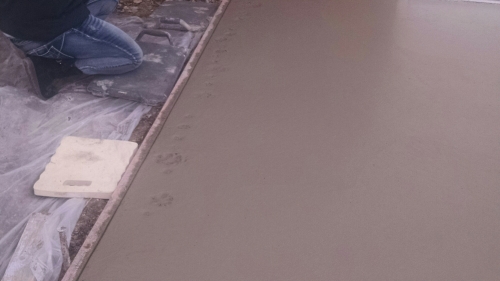 On the same day, Oliver came up with a different way to leave a mark. He pressed his paw into my arm for our whole morning snuggle.

And he didn’t even have to leave the couch.

So… It is cold in Alaska. And snowing in the northeast. At least this is what they are saying on the Book of Face. I wouldn’t know because I don’t watch the weather.

And because in Cheyenne – that’s Wyoming – it is in the 60s. In January.

This is bad news for hockey players with outdoor rinks. But it is great news for kittens.

Hot on the Trail

A bag of opened trail mix with cranberries has been sitting on our counter in the kitchen for a year and a half. This week, I decided to feed it to the squirrels and birds.

Obi hates when I decide to store food outside on the window sill!

Whenever the squirrel jumped up onto the roof of the garage, Obi would lunge at the window so hard he was working the shelf away from the wall.

I moved the director’s chair, where Oliver sleeps when I’m working, up against the shelf.

Oliver for not approve.

Obi does not approve either.

I had a blueberry muffin for breakfast.

A few minutes later, brown kitten was gone and grey kitten was in my lap.

I had a 9 a.m. meeting so I was unable to find the muffin cup that I assumed was under the couch. I remembered, right before my 2 p.m. meeting, that I hadn’t found it and thrown it away. I didn’t see it in the minute I had to look for it.

On my way to the meeting, it hit me. Oliver was screaming his head off at lunch time. The paper wrapper was missing. It tasted like muffin.

After my meeting, I raced home and found a flashlight to thoroughly check under the couch. I moved furniture. I poked Oliver’s belly (just like years of watching Grey’s Anatomy taught me) to see if it was tender. And I checked under the couch again.

Then I made the call to Dr. Tiffany.

“It’s not Friday so you can’t have an emergency,” she joked.

As I was putting forward the question about if a hypothetical grey kitten had swallowed a hypothetical muffin wrapper would it hypothetically pass with a tummy ache or would it gum up his hypothetical system, I paced the living room. And there it was. A whole muffin cup was peeking out at me from the entry way closet.

Tiffany assured me that a cat would have to rip a muffin cup into small pieces to get the whole thing down, so there wouldn’t have been much to worry about. I think she’s never seen Oliver eat. He could totally swallow a wrapper whole.

I don’t think I’ll give him the chance to prove it.

***
Can you find the kitten in this picture? 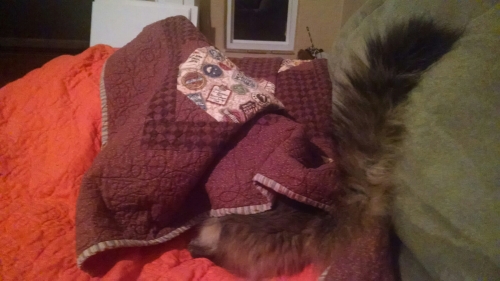 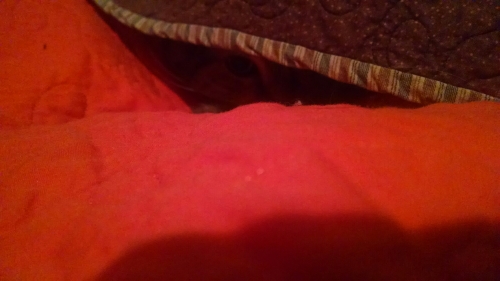 King of the Hill

Before my current job, it wasn’t completely ridiculous for me to have a huge wardrobe. Lately, though, my day to day outfits have been jeans and a sweater. It’s great fun when I have a reason to use the iron.

On top of that, I’m older and wider than I used to be.

So I’ve gathered up a lot of clothes to donate to a local charity when I have a spare afternoon. 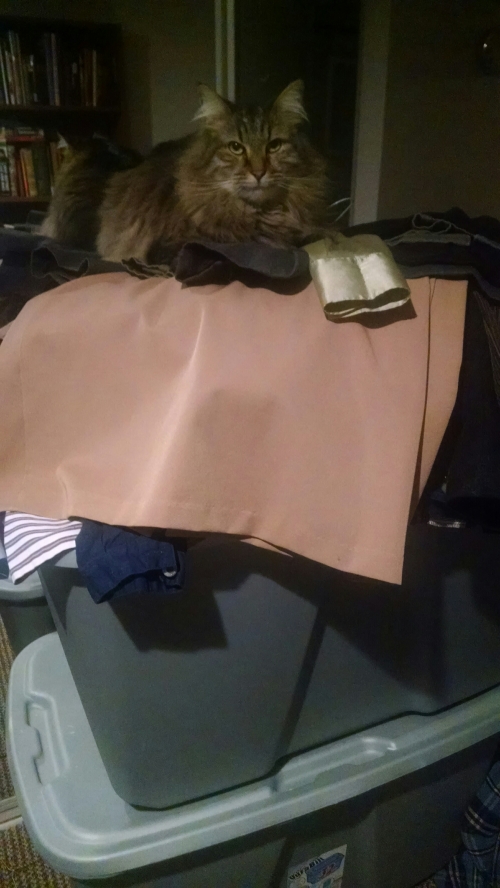 Obi hopes I never have time.

And he hopes, every day, that I’ll forget to close the closet door.

When I got up this morning, Obi was bored. BORED. Boooored. I followed him to the belly rubbing rug and gitchy gitchied his belly for a few minutes. Then I rebuilt his cave and arranged the quilt as an annex to the cave.

When he was surrounded by toys, I grabbed the phone to take a picture. He promptly got up and his in the cave.

But then Oliver came along. He has no problem having his picture taken.

But the cave monster took issue with his brother playing with HIS toys. 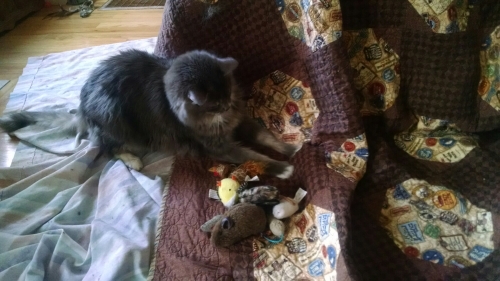 This is a picture of Oli and Obi. After a couple minutes of inter blanket warfare, Oliver left to see if there were snackums in the kitchen.

Obi decided that guarding his toys was more important than guarding himself from the paparazzi.

After a long day of work, I sat down on the couch to take a Wendy’s survey to ask them how my double cheeseburger became a chicken sandwich off the dollar menu. Kitten Thunder, being allergic to beef, had no complaints about the mix up.

Oliver snuggled down on my lap while we watched Friends and The Boy ate his sandwich.

After a couple episodes, I told Oliver that he had twenty minutes left before I was getting up to go back to work.

Then The Boy got up to go to train club.