Hello purrsons, Obi here. I wanted to tell you about a meaningful experience I had the other day. It started like any other evening. The Boy was on my chair and The Girl was on the couch. They were eating food that didn’t have tuna or cheese in it, even though they asked me what they should have and I told them. I don’t know why they ask me. They never listen.

I was bored. The Boy had rubbed my belly when he got home, but that was over. The Girl is home all day. That’s boring. Not that I wanted her to leave – whenever she leaves I have to spend a bunch of time retraining her to sit on the couch. She needs to sit on the couch. That’s where I can supervise her AND watch the good OutTV channels. Wrens in Bushes is going to start up again soon.

I was bored. Then The Girl called upon the Reddot. The Reddot is a rare visitor to our house, but I love it. It runs faster than Oliver. And it climbs walls. And it doesn’t tell on me if I leap from across the room and pounce on it’s back. Oliver is such a whiney butt. That’s what my purrsons call him. I agree. Though the whining doesn’t come from his butt.

I chased the Reddot around the living room for half an hour. A couple of times it got away from me, but whenever I gave up looking for it it came back to find me and ask for more chase. Once the Reddot and I were both tired, I stretched out on the floor to rest.

The Reddot climbed up on my paw. I was very still so it wouldn’t be scared away. I thought, maybe, it would stay and be my pet. Then we could play whenever we wanted. Oliver even likes the Reddot. It runs around him really fast and he chases it in tight circles until he falls down. Oli would like a pet Reddot. But, I thought, I would make him share equal – he would not be Alpha Reddot owner.

I was really still. I was so still that I dozed off. When I woke up, Reddot was gone. I guess what they say is true: “If you love something, set it free. If it is still there after you nap, it is yours. If it isn’t, be really nice to The Girl.”

The Girl asked if she could treat you to some memes about Reddot. I told her if it would get her to stop kissing my ears, she can do whatever she wants. I’m going to see if The Boy is doing any manstuff. 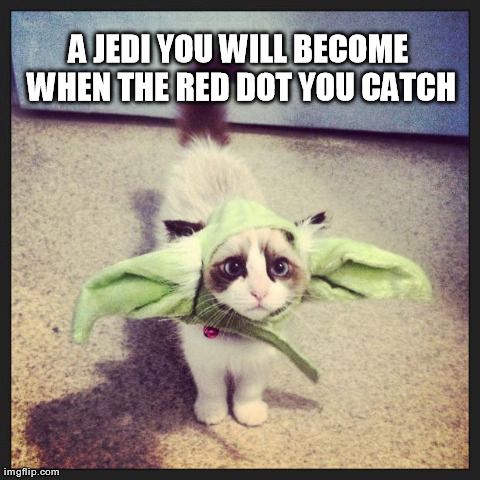 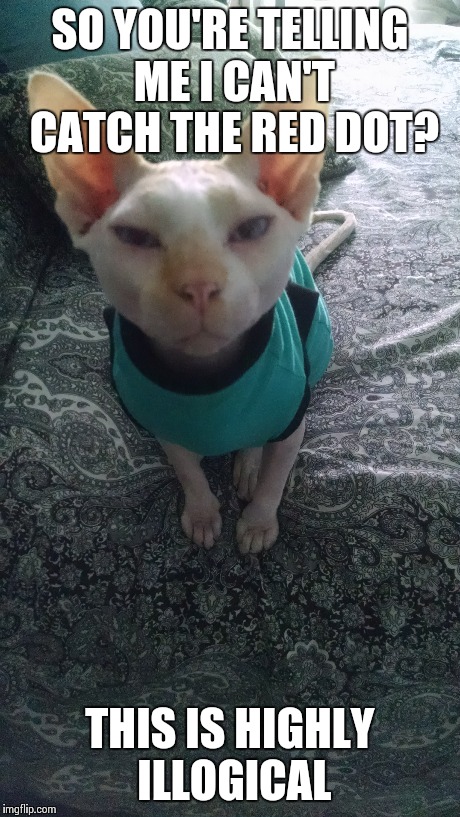 Please note: I put the URL for all of these memes in the code but something went wrong and it isn’t showing up. Faced with the choice of not posting them, I am choosing to post them with only the attributes that are visible. My apologies to the creators of this work. You made me LOL.

I tried to make the lack of quilt on the floor up to Obi by giving him a sheet and a scarf to get his belly rubbed on.

The Boy started painting the laundry room this week. Obi and I inspected his work this afternoon. The brown kitten would like the shelf that was promised to him.

I went to the grocery store this afternoon and came back with a large stack of game pieces. Obi is not interested in a $500,000 vacation home or a romantic getaway for two. He just wants me to sit still.

Oliver is the Alpha cat in our house. He’s pretty relaxed about enforcing his role. He shares laps and boxes. He lets his brother win as many thunders as not.

But food? Oliver is ALPHA.

Lest there be any doubt, Oliver will eat things he doesn’t like just to make sure everyone knows he can eat before Obi. Like cheese.

Today, Obi was about to enjoy some nice grated cheese in the breakfast nook. Oliver came rushing in and shouldered his brother out of the way.

The brown kitten looked at me sadly.

I grabbed another pinch of cheese and put it on the other plate. Oliver rushed toward it.

The brown kitten looked at me sadly.

I swooped Oliver up into my arms and kissed his face. He tried to push away – must eat the cheese. “You’re Alpha cat,” I said. “Not Alpha brat.”

As I left the kitchen with Oliver, I glanced back at the breakfast nook.

The brown kitten looked up at me, happy. With a mouthful of cheese.

A couple weeks ago, we were going through a heat wave. It was even warm enough, a couple days, to open the windows. So when Obi came along and knocked the quilt off the couch, I didn’t really mind.

Since then, he’s claimed it as the belly rubbing quilt.

As it has gotten colder again, The Boy has mentioned to Obi that the quilt was going to get reclaimed by the people and the couch. Of course we ignored him. He is a silly Boy.

The quilt is in the laundry.

The belly rubbing spot is bare.

After the long week, The Boy and I went down to Colorado for a train show and some tasty tasty beer. Kitten Thunder did not approve.

But there was a promise.

The promise of Sunday. After The Boy got up, Oliver came and snuggled with me under the blankets. And it was good.

But then I got up.

Oliver was full of cute. And disappointment.

I promised him that I would go to the gym and grocery store, then we would snuggle on the couch all afternoon.

A promise is a promise.

It has been a long week at the Thunder house. The Boy has had his usual early and late meetings as interim boss in his office. And he’s been getting up early a couple days a week to go to the gym.

In addition, I have been working at several conferences, starting on Sunday. Kitten Thunder did not approve if all the gone time.

To make up for my absence, the conference coordinators sent Kitten Thunder a salad.

Just kidding, this bouquet had some toxic flowers in it so I let them sniff all the flowers and then took it to a friend.

That, and the fact that I’m home tonight, are thanks enough.

Obi is getting better and better at snuggling on my lap. He struggles, though, with anything that breaks his focus. If I shift, or The Boy comes in, or Oliver joins us on the couch, he runs away.

Today he was determined to stick it out.

Just as he laid down, The Boy walked through the kitchen. But the brown kitten stayed in my lap. He did not care what man work The Boy might be doing.

Then I reached for my drink on the coffee table. That was fine. He wasn’t budging.

Then, the ultimate test. Oliver came for a snuggle. With the brown kitteh on my lap, the grey kitten attempted to find a comfortable laying spot on my chest. He stomped. He turned. He backed into the arm of the couch to try approaching from another angle.

Finally, Oliver settled behind me on the arm if the couch. Obi was still in my lap.

Good boy, Obi, for letting him.

We often find enough hair in our house to “knit a kitten.” So whenever I knit, Kitten Thunder is hopeful that a minion is on the way.

Lately, though, I’ve been working on squares that will turn into a blanket some day.

Kitten Thunder does not approve.

For All The Wrong Reasons

On Sunday, I was painting the laundry room and Obi came to check it my work. He hopped up onto the OutTV sill and fixed me with a hard glare. The sill was covered in dust.

He did not approve.

I told him that, once I got it painted, The Boy would extend his shelf and it would be even better. All this work was for HIM.

He said we could just put up the shelf and be done. No paint needed.

But I kept painting.

Later in the day, I went upstairs to paint the bathroom. The Boy had taken down the towel racks. And light switch covers. And… The supervising shelf.

Obi did NOT approve. How was he supposed to supervise without a shelf?!?

I need to put one more coat of paint on the wall before we put his shelf up.