On Friday, Oliver climbed into my lap for the midmorning snuggle. But something was different. My grey kitten had an all over, big time tremor.

And The Girl had an all over, big time panic.

As Dr. Tiffany and Laura walked up to my door, I asked if Katie had told them I was freaking the hell out. Tiffany said she didn’t need to be told.

By the time they got here, the tremor was gone. Tiff did a full work up, really ticking Oliver off and making Obi nervous. We decided it might have been a bad can of food (Obi, who smells his food, had passed on breakfast) or something ingested from our home improvementing.

Oli bounced right back and really enjoyed the tuna for a snack and tuna for breakfast prescription.

So, Monday, as I was getting ready to leave town for a conference, I wasn’t concerned about his health. Since I was leaving The Boy home, I also wasn’t too worried about stress.

I put my suitcase in the car. Oli noticed it on the way out. He noticed my computer in its bag. Then I realized I forgot to do something and pulled my laptop out and sat down on the couch.

I dumped all the stuff for the conference on the other team members and called the vet. 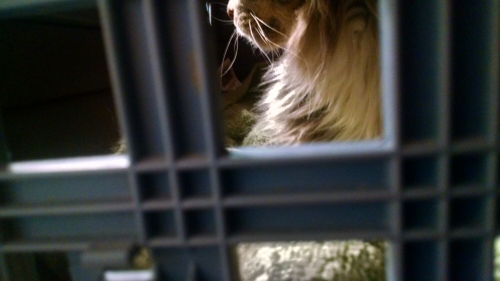 This time we went in. The tremor was gone. Of course.

Oliver got more poking and prodding. He showed Tiffany how healthy his hiss is. And then we went home with instructions to take video next time the tremor happens.

Honestly, I probably could have gone to the conference. And worried. So instead I made arrangements and stayed home. To worry.

I’m not the only one who wonders about the suspicious timing of the returned tremor. Would it be worth a vet visit to keep The Girl from leaving?

***
So what’s wrong with Oliver? We don’t know. If it isn’t food based, it is probably something is his brain. Maybe something degenerative – The Boy says, “so his puddin’ head is getting… more puddin’y?”

The tremor is NOT a seizure. It doesn’t seem to bother him at all. It probably isn’t an emergency situation.

Heck, he may never have another tremor. At least until I pack the suitcase again…

The mess was everywhere. As I entered the living room, I could see the first indications that someone had suffered an ignoble end. Two steps in, it was clear.

His innards were strewn across the room. His tail was caught in the Velcro of my laptop charger. Poor Yarn Ball.

As we know from The Princess Bride, though, there is a difference between dead dead and just mostly dead. Would true love bring him back? 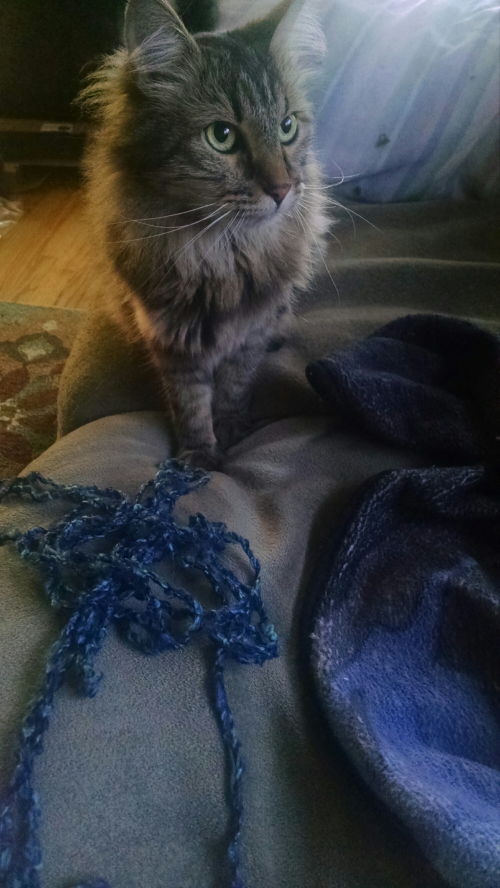 I went about fixing him. I rerolled him faster, stronger.

Obi seemed happy. Then, about an hour later, The Boy walked into the room. “Oh noes,” he said. “The yarn ball isn’t a ball anymore.”

I looked at Obi. Suspicious. Suddenly, what is assumed was kitten-slaughter seemed more like murder.

The Boy started trying to fix Yarn Ball. After realizing he’d never rolled a ball of yarn in his life and that it’s not as easy as he thought, he handed Yarn Blob to me.

With a kiss to the ears, I set the brown suspect free and tossed Yarn Ball to the floor.

We’ll see how this story unravels in coming days.

Cat in the Box 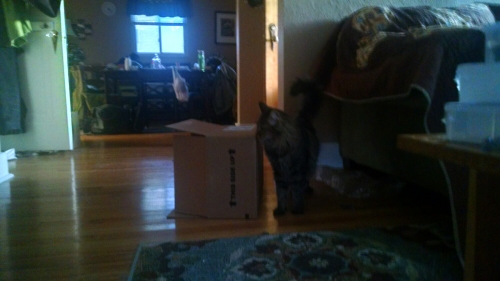 Why don’t you get inside?

No room. Brother in the box.

After punishing me for our absence last weekend, Oliver was shocked when we up and left again this weekend.

This time we were in Steamboat. Feeding birds. 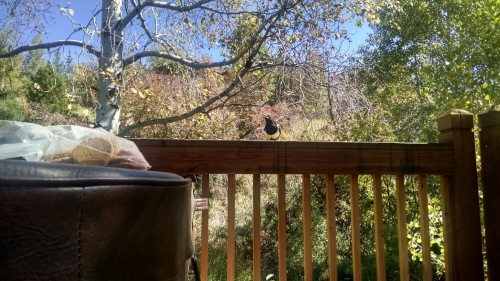 And walking to waterfalls. 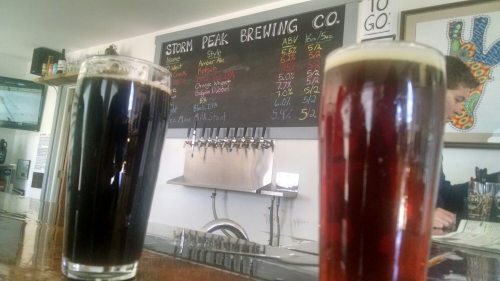 The kittens, obviously, did not approve. Especially since there had to go two days with only snackums to get by.

But we have come home. And they survived. Obi is demanding belly rubs from The Boy every twenty minutes to work off the rubbing deficit.

And Oliver and I did this.

He got up and went to the recliner to finish his bath but when I picked up my phone he came back to do this.

I’m going nowhere and doing nothing.

Seriously, Girl, stop taking pictures of us on the quilt couch. We’re going to stop being cute.

Look at us sucking all it cute in.

Nothing to see here. 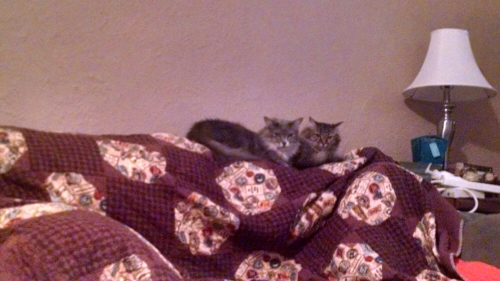 Obi spent the whole day setting up ambushes for his brother. Brilliant ambushes. Ambushes that were rarely turned into successful attacks.

Things started out well for the brown kitten. Oliver and I were sleeping when we heard him call from downstairs. But as Oliver followed me down the staircase he was attacked from behind. Either Obi has learned to throw his voice or he crept upstairs after calling us. Sneaky, either way.

But that’s where the brown kitten’s luck ended. All day, he would race into the living room and hide. Behind the arm of the couch. Under the quilt. Behind my legs.

And there would be no brother.

Oliver kept getting distracted, mid-Thunder, and failed to follow his brother into the trap. There were snackums to eat. Dirty feet to wash just before getting to the living room. Fuzzies to sniff.

And even when Oliver walked into the trap he had perfect timing that foiled Obi’s plans. A cleverly concealed brown kitten leapt from behind the arm of the couch and landed… Where Oliver had been second before – before he decided to walk over and scratch the door mat.

So not right, Obi pouted.

Obi has given up on battle and is napping on his quilt. Oliver has decided to help me with my game. He’s lending me his strategy: it’s smarter to be lucky than its lucky to be smart. 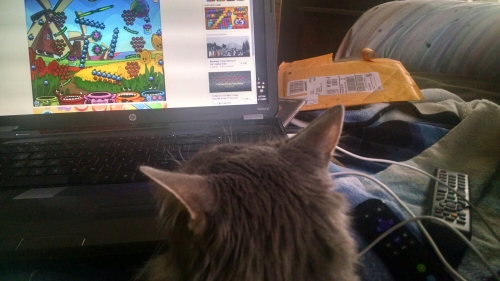 I confess, now that we’re home, that The Boy and I were gone fishing this weekend. So of course we needed to be punished. Of course we did.

Oliver, though, seemed to decide we ask needed to be punished.

First, he barely snuggled with me until just now. We had a quick snuggle when we first came home because I was letting Obi get a belly rub before feeding them. Then the grey kitten was done with me until bedtime. He attempted to snuggle then, but I irritated him by getting up to use the bathroom. So he decided to hold his grudge. All night. All morning. Most of the afternoon.

I will say that Smell-o-Vision was exceptional today. I might have chosen a window sill over my lap as well.

And it was good that all the windows were open. Because there was pee.

Somewhere, there was pee.

The litter box was filthy. I get that. But why the grey kitten couldn’t pick a spot, and why it couldn’t be an obvious spot, perplexes me.

So I threw away the boxes.

Then I washed the quilt and Obi’s cave. Then his sheet. Then his blankly.

Then I threw away the bags.

I think I’ve got it.

The kittens approve of a clean quilt  – Obi is sure that I’ll put this back on the floor where he’d dragged it as soon as it is fully dry.

And their minions are minty fresh. 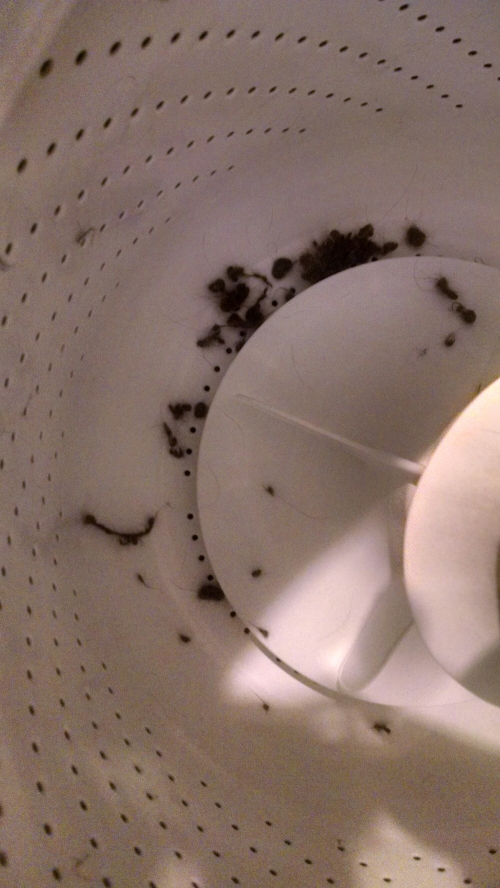 I notice you’ve been going to the gym a lot lately. Please stop. First, there’s the whole “go” thing that I find troubling. But, must important, you are fluffy in all the right places for maximum kitten comfort.

There’s nothing for him to eat. 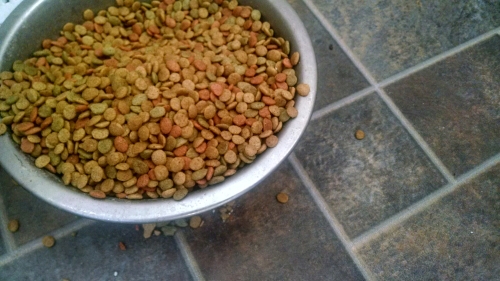 See that? Those are snackums.

He can’t eat those.

Because Oliver is starving.

The Boy and Obi have done a fair amount of Man’s Work the last two weekends. The old wooden windows in our bedroom have been replaced with energy efficient vinyl ones. About a half ton of spray foam has been added. Considering we found a hole in the wall that went all the way to the outside last winter, we’re optimistic about improved heating this year.

Oliver was kicked off the cat shelf during afternoon nap time.

Obi, being a manly cat who is comfortable with tools as long as they don’t make noise, napped amongst them during The Boy’s break. 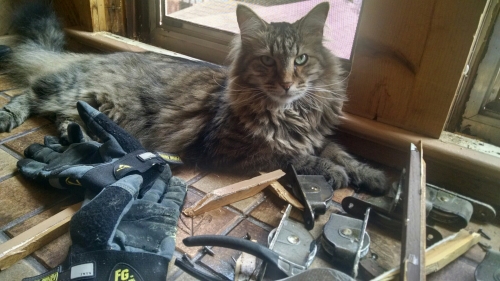 This was last weekend. Yesterday The Boy worked on the window by our bed. Obi disappeared as I was getting ready to lock the kittehs in the basement so I supervised The Boy until the brown kitten arrived – just as a hole happened in the wall where a window used to be. I grabbed him on his way to hopping into his favorite sill.

Then he and I stuck our heads out the side of the house. Whoa.

Since The Boy was interrupting afternoon nap time AGAIN it was fairly easy to talk Oliver into following his brother and me into the basement.

We needed to break in the new loveseat anyway.