The Beginning and the End

Today started at around 3:30 a.m. when a grey kitten stomped on my face and cut my chin with a back claw. I wasn’t fully awake when I grabbed him and threw him.

I was fully awake and apologizing before he landed.

He was fine. I was bleeding and guilt ridden. And awake, so I had to take my bladder to the bathroom.

All day I checked him all over for pain. He’s fine.

We’ve got one more night at Camp Couch and I should be over my cold and back to our normal schedule.

In the meantime, we’re giving my face a tiny bit more room. 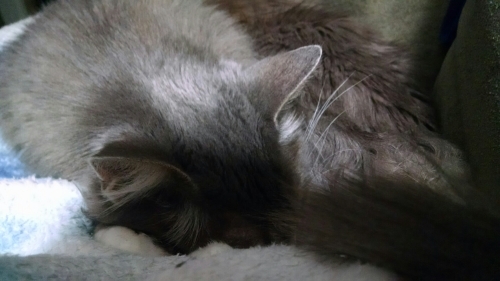 How Oliver’s nose wrinkles when he’s chewing on his fingertips during a bath.

Obi and The Boy’s morning routine.

The way Oliver reaches his arms up over his head so I can pick him up by his armpits.

When The Boy is holding Obi, the brown kitten will headbutt his Boy’s nose.

The clever escalation of our wake up routine: calling, fuzzy toes up the nose, cold nose on the eyelids, then stomping when the breakfast bell goes off. Yes, it’s annoying, but you have to appreciate how well it works.

How much Oli and Obi love each other.

That The Boy will tuck Oliver in when he takes over the prewarmed chair.

Obi still plays like a kitten even though he’s seven years old.

That these three, soon to be four, boys are mine.

In the ongoing efforts to prepare for our new addition, The Boy and I have been trying to combine our offices. This requires me to clean.

And to pull a while bunch of stuff out into the living room to make room so we can just get furniture moved.

Oliver decided the best way to deal was just too take a nap and see what we’d fine afterward.

That left Obi to do the inspection and IT work.

The artwork wasn’t very inspiring. He would have picked something with squirrels.

He rolled his eyes when I told him not to type anything.

OutTV was on… But kind of far away for his taste.

Then we checked the inside of the desk. Obi fully approved of this arrangement.

Oliver came downstairs and looked around. It was fine. He only found one issue: The Girl was at a desk and not on the couch. 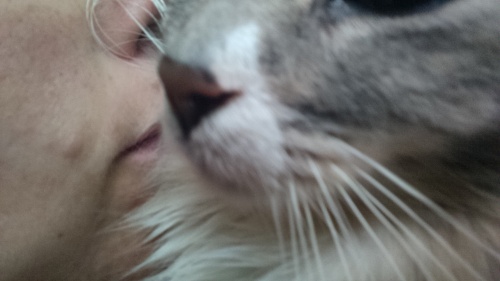 As you know, I got off the couch on Sunday. And my actions were supervised.

And interrupted by cuteness.

I was eventually allowed to wash the new linens. It was right around the time I went into my office to clean THAT and Obi found a catnip ball… 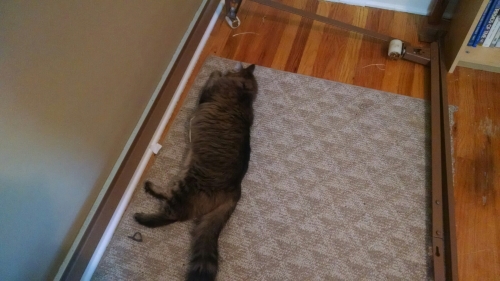 What happens when The Girl spends time in the laundry room, hanging hooks on which to dry cloth diapers?

She gets help, of course.

This was much easier on the kittehs than cleaning.

Obi doesn’t know how to spell, but he’s pretty sure this spells “stop taking my picture.”

Those of you who have been with us a while, know that Oliver has allergies. This fall we discovered his liver is failing (hopefully very slowly) so we’re trying not to give him Prednisone anymore.

Benadryl, the alternative, is just icky. The betrayal, the hurt, wasn’t a long term option.

Dr. Tiffany from Cottonwood had one last suggestion: fish oil. It’s an anti inflammatory. And worth a shot.

The day it arrived, I pumped out a bit for both cats. And… It was delicious! They loved it! Hoorah!

But, because this made me happy, it couldn’t last. Oliver was not in love with breakfast fish oil.

Neither of them really wanted it that night until I tossed some treats in it.

The next morning, Oliver ate around the fish oil and left all the food that was touching it. He went and talked Obi into saving his HIS breakfast, from under the office door.

That night no one would eat the fish oil, even with treats.

So now what? Well, in the morning, Oliver will eventually lick the plate clean. Once all other food options are exhausted. So no worries there. Plus, we’ve decided to stop separating the cats for breakfast – Obi is more worried about missing something while he’s locked away than eating.

In the evening, we have baby food! I received several tips for medicating a cat on this blog and decided to combine two – I got some chicken baby food to surround the benadryl and froze it into pellets. 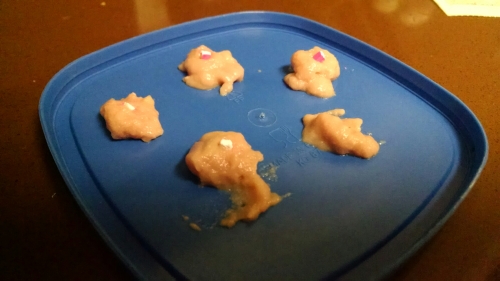 I mixed the rest with fish oil and used that to get the medicine down.

Did the pills work, you ask? I don’t know. Because the fish oil IS working. Like a miracle. All the sores on his sweet grey face after healed up.

No betrayal. No hurt.

Just a Boy shaking his head and muttering something about spoiled cats as I sit on the floor and spoon feed my cats.

A letter from Oliver:

Hello, peoples of the bloggy world. I am writing this, or having My Girl transcribe it, because it is very important that we stay on the couch.

Earlier today, The Boy was doing things in his office. Since My Girl was sleeping in the couch, Obi and I were free to help him.

This condo for kittehs used to have books all over it and it wasn’t very useful. We like it better this way.

Obi also checked out some drawers and a cabinet The Boy was emptying. The Boy telling my brother he wasn’t actually being super helpful (which is a ridiculous assertion) woke up My Girl.

And that’s when the troubling part of the day started.

My Girl, after I showed her the newly emptied kitteh condo, went into her office and started moving things around. Garbage bags were filled. Recycling bins were taken out, filled, and taken out again.

It was a flurry of activity that means one thing: somebody is coming.

But who!?! The Boy’s office doesn’t need to be cleaned for company. Certainly not the kitteh condo.

Obi looked at me, nervous. I looked back at him.

I was so upset by what was going on, I somehow ended up in the basement and couldn’t find my people. I had to yell for help.

My Girl called and called and eventually I found her waiting for me at the top of the stairs. She suggested that we go sit for a minute on the couch and calm down.

So here we are, on the couch. If I try, maybe I can keep her here for forever.

Shortly after moving into our house, I noticed we were not alone. A tiny alien was living in our upstairs bathroom.

And I do mean tiny.

Like, one day I noticed a cat hair was walking across the floor. Tiny.

Obi and I investigated. We got really close, identified legs and body type. Then I googled.

It was a silverfish.

Being a lover and collector of books, I freaked out. But, for some reason, we have one. One silverfish. Okay, maybe two – I found one at the top of the stairs once but I’m not convinced the bathroom alien wasn’t on vacation.

So I’ve let the alien stay.

It gives Obi something to do while I’m brushing my teeth at night. Of course, this little alien is FAST and he can run full speed into the wall and just disappear.

So the hunt has just gone on.

Until last week when Obi stepped on the alien.

It was an accident and Obi didn’t even know he’d done it. He was mildly annoyed by me because I knocked him over and started examining his feet – I draw the line at a cat inadvertantly bringing bugs to bed (I also try to draw that line with cats purposely bringing bugs to bed, but that’s another story). But there was no alien in sight.

We also searched the floor.

We searched the next night.

And the next. No alien.

And the next. No alien.

Last night, Obi searched everywhere and sat down to glare at me. Where was his alien?

Then I saw him. He was tiptoeing (I imagine) toward the wall behind Obi. I pointed! I cheered! He lives, I cried!

Obi huffed and left the bathroom.

There’s no reason to be excited if there’s no alien to hunt.

Part of cleaning the house this weekend was folding up the quilt and replacing it with a lighter blanket. Then it snowed so maybe I was premature.

But Obi likes the change. 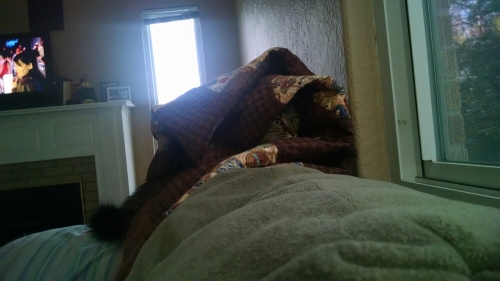 I think. It’s hard to tell because he disappears for an hour at a time. He’s a master hider.