Oliver started training his people kitten early but was disappointed at first. It seemed that Squeak was not going to be the talented petter that The Girl is.

But he has not given up. Slowly, Squeak is gaining the dexterity and strength it takes to become an excellent scritcher.

Last night I sat on the floor in the kitchen with Squeak while The Boy fixed dinner. Oliver decided this was a good time for another lesson. He approached an outstretched hand carefully and rubbed his chin over it.

Then, having encountered none of the resistance or fingernails needed to make a good chin scritch, he tried something different. He shoved his head under the outstretched hand.

And it happened. The fingers flexed. A light squeeze occurred.

A pleased grey kitten walked under the outstretched hand.

And it happened. The fingers flexed. A light squeeze occurred. The tiny hand tightened to a fist… And came away with a tuft of soft grey fur.

The lesson was over.

Obi came by for his pet from the people kitten. He shoved his head under the outstretched hand and started walking.

And it happened. Fingers flexed. A light squeeze occurred. And a brown kitten sidestepped out of reached. 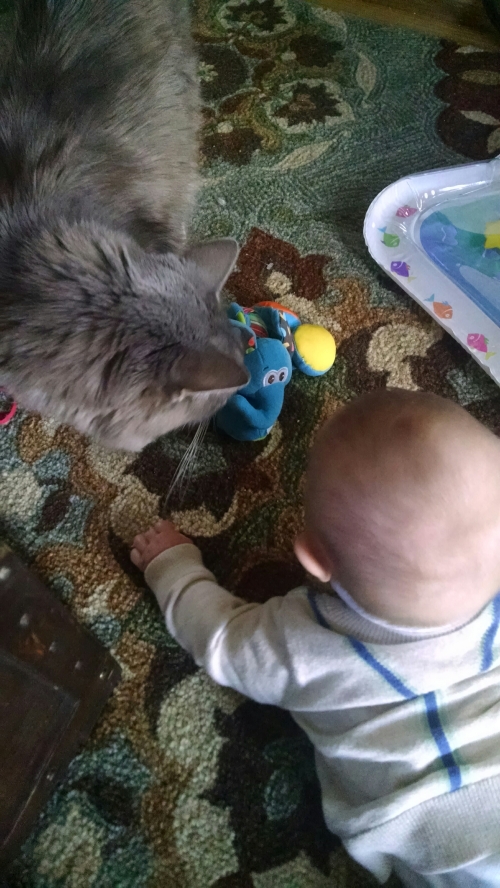 Obi is coming off his Prozac and it’s making him more playful than ever. Unfortunately, he and Squeak still don’t agree on how to play with toys. 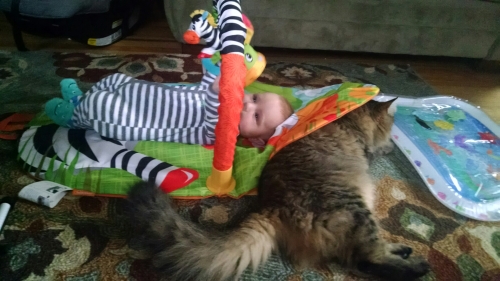 So, later in the day, we were hopeful that Oliver would play with his brother. We asked him to go be unsuspecting.

Oliver agreed and went to lie down. And he just laid there.

No matter what Obi did.

“There’s a difference,” The Boy told Oli, “between unsuspecting and oblivious.”