Peoples of the internet, Obi here. Oliver suggested that I should give you an update on Squeak’s training.

I suspect Oli is just trying to distract me so he can take a nap. But whatever.

Squeak is getting to be more useful.

Oliver has been teaching him to pet. He’s actually pretty good, says The Girl. She says he’s a natural. He has the scritchy motion down and rarely grabs. Once he grabbed Oliver’s ear, after several minutes of scritchying his head. He was NOT happy but he waited patiently while The Girl pulled the baby’s fingers open. But that did end the lesson for the day.
Oliver says I need to be patient with training if I’m going to be Chief Executive Kitten when he’s gone. I say he can stay for forever because that kid isn’t touching me until he’s fully trained.

I mean yes, this is super cute. But it’s also an invasion of personal space. 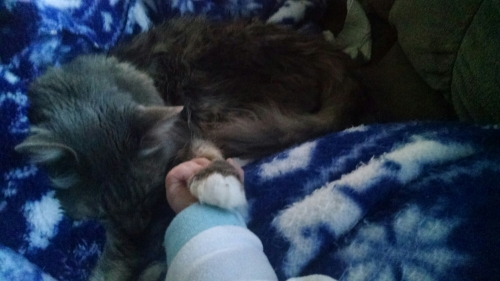 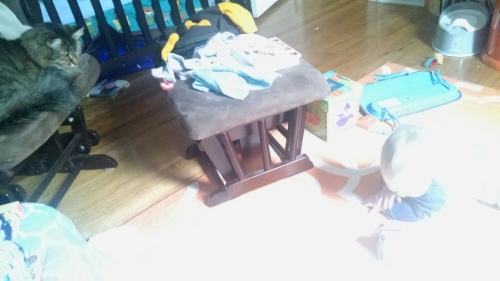 From a safe distance.

He coming along. He holds things in his hands and rolls all over the place. Any day now he’ll figure out that crawling thing and I’m going to see if he can Thunder. Maybe he’ll actually do what he’s supposed to, unlike Oli, and travel past my clever ambushes.

Yesterday, though, I realized I’d underestimated the value of my people kitten. I mean, I like him and all. But I’ve been skeptical of all these promises of fun and usefulness.

Then it happened. The Girl used the magic toy making stick to find my yarn balls and one of Squeak’s stuffed animals. He was unimpressed by the reappearance of his missing toy.

Like Excalibur, the stick called to him. Is he the chosen one? Is he the hope for us all and bringer of new pieces?

I’m suddenly hopeful for the future.

This entry was posted in Uncategorized. Bookmark the permalink.