While I was gone, Kitten Thunder hatched a plan. They always want under the sink in our upstairs bathroom but we’ve put baby locks on the doors to keep them out since the time we went on vacation and they spent some quality time in our walls. Accessed, initially, from the hole in the wall under the sink. Then they knocked a utility panel down and that made it easier.

There was also that time that Obi locked Oliver inside the cupboard.

So…baby locks. The kittehs “help” me clean the bathrooms, thinking I don’t know they are waiting for me to open that door to get the sponge. But I do know and I’m prepared to block them.

The Boy did not know.

One of the kittens exploded in the master bedroom on Sunday. I got a text from The Boy: “the boys are being naughty.”

That would be Oliver’s butt as he disappears into the wall.

And Obi, not interested in coming out when his brother had been grabbed and locked out of the bathroom.

He’s also not interested in having his picture taken.

Posted in Attempt at humor, Cats, Oh please someone think this is funny, Uncategorized, woe is me.

Confession: The Boy and I weren’t home yet when I posted on Sunday. So there are more kittehs of Italy at the end of this post.

Lori, Best Kitteh-Sitter Evah, took great care of Kitten Thunder while we were gone. It wasn’t exactly easy. Winter decided to get in one more big storm, dumping ten inches of super heavy snow on Cheyenne. It must have been super heavy – it ripped a giant branch off one of our trees that was trimmed recently. Poor Lori had to drag the branch/log out of the street. Above and beyond.

She reported that she and the fuzzies had a routine involving a five minute brushing of Obi, then breakfast in the morning.

THEN breakfast!?! I can’t imagine howo unacceptable this was for Oliver. Oli doesn’t even think The Boy should waste time putting on pants in the morning before breakfast. And woe is The Girl who can’t find her glasses (because a cat knocked them off the nightstand) in the morning. She shall be verbally abused for the delay.

In the evening, Lori would return to watch some television. I left her a bag of treats to bribe the kittehs for affection. She has so bribed.

And on the weekend, Lori stayed at our house. Did I mention what a good kitteh sitter she is?

She’s a good girl. We’d rub her belly or scritch her ears if she wanted. Instead, we bought her gifts. Hopefully she prefers jewelry to inappropriate touching. 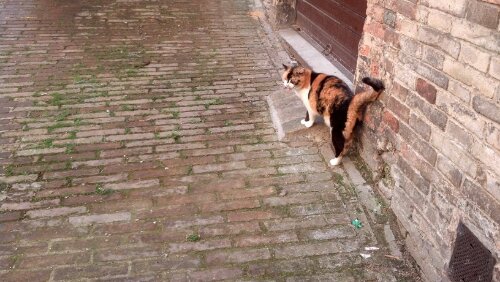 This pretty girl was in Urbino. She showed us her doorway and asked if one of us might be so kind as to turn the knob and let her in. We did not so she asked the next group. And the next. As we turned out of sight she was talking to a priest about the doorknob situation.

This cat had the opposite problem. She wanted out. Or for someone to send up some sardines.

There’s no cat in this picture, just what I assume was a cat door in a palace. It was about a foot tall. I’d have had The Boy stand there for scale but just after I took this I realized that photography was not allowed. 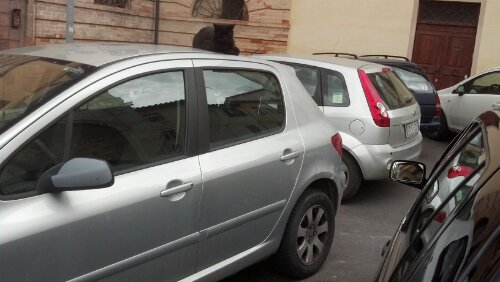 Car alarms in Perugia are very sophisticatted. And okay with having their picture taken as long as you keep your distance. 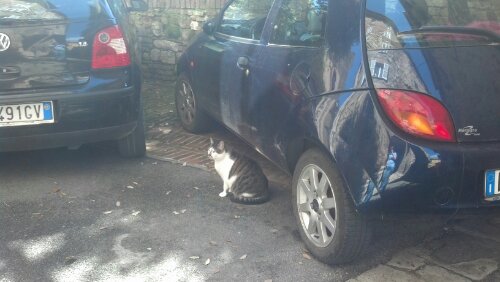 This handsome boy was off duty in the piazza outside a chapel. If only he had been so kind as to tell us that it was his day off. And the chapel’s day off. We waited quite a while for a church that doesn’t open on Monday to open open open.

***
Dogs of Europe! Hey, we love the pooches, too. Not all of them got into the blog because there were dogs walking their owners everywhere we looked. 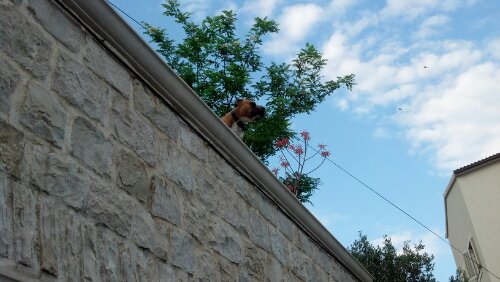 The dog of Split.

The bored dog of Mostar. 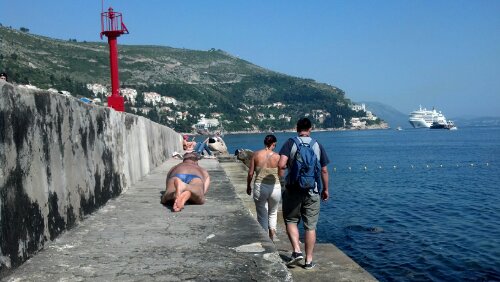 This is not a dog. I thought I had one more dog picture but I don’t. So, since I had to pick a picture…I thought this view in Dubrovnik was particularly special.

Where are you going?

We had a long, productive day today. About an hour ago, Oliver was laying on my chest for a snuggle. Then he got up and started walking away. I rolled over to my side.

“Where are you going?”

He stopped. Turned. Came back.

Obi has had forty belly rubs today. Since they mostly came from me, they quickly degenerated into biting and licking and kicking. And then the kitten gets wrapped in the cave and gitchy gitchied.

Eventually I would get up and walk away. A brown kitten lunged out and grabbed my feet.

“Where are you going?”

It is Thunder Thursday! This week I kitteh sitted for Mona’s fuzzies. They immediately set out to prove everything she’s told me about them wrong. Gus ate all of her food in one sitting, then licked the other two plates clean. She did not want to go to the office to eat. And she didn’t need to because Gabe didn’t even try to eat her food.

And this? This is a kitteh who doesn’t like people…purring and getting a belly rub.

Last night, shortly after the lights went out, Oliver and I were having a snuggle when we heard a loud crash. I had been dozing off so I don’t know how loud it actually was.

We both perked our ears to listen.

I heard a tiny mew from Obi. I listened some more. Eventually…another mew. Oliver and I were out of bed and searching for the brown kitten. Okay, I was searching. Oliver was hoping I was going to feed them.

Obi was found, safe and sound, in The Boy’s shower trying to sweet talk a miller moth. Back to bed with me.

With drama such as this, and the fact that I am cheating on him with three other cats, it is no wonder Oliver has felt unsettled lately. Today he was having a tough time napping. When I was available, he was only able to concentrate on sleeping for ten minutes at a time. And then I did things like kitty sitting and taking a walk that required me to leave the house.

Anyway, I came into the house after my walk, turned on the ceiling fan and plopped down on the couch. And, at last, Oliver was able to get comfortable for an extended nap.

Posted in Attempt at humor, Cats, Exercise, Oh please someone think this is funny, woe is me.