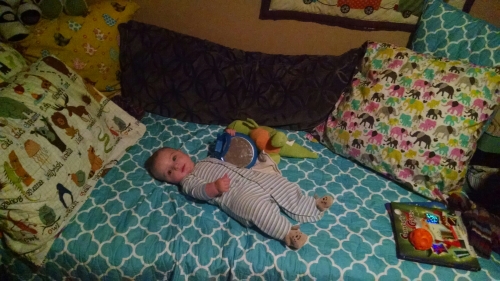 Upon the wall throws lighted bands. 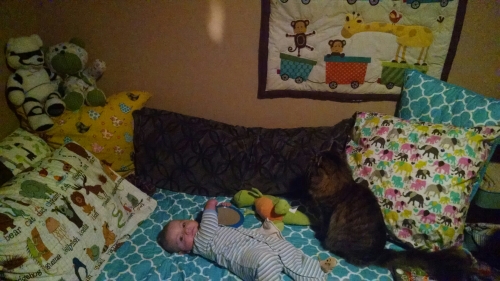 The cat will chase them to and fro,

Though you’ve no idea where they will go. 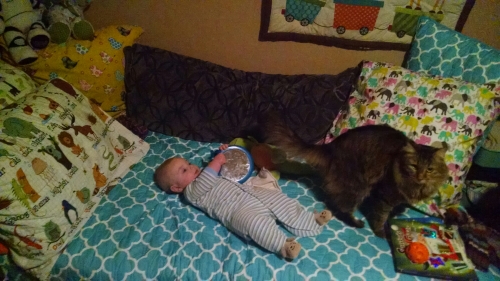 A short update on the black cat situation: Oliver and Obi were locked in the spare room all day on Thursday. On Friday, while I was in Rock Springs, The Boy was unable to con Oliver into going to the basement so Obi was locked in the basement and Oli had the rest of the house. On the four hour drive home, I thought and thought and thought about what else we could do to not ruin their lives until this is resolved. Hours later, at 2 a.m., it came to me.

The cats really only need to be blocked from a window where they’ll see the black cat at the same time. So I closed the drapes in my office and put a sheet up across the bottom of the cat shelf windows. And this only has to be like this when the boys are home alone and The Boy or I won’t be able to intervene.

It’s Sunday, salmon day. Oliver and Obi have a new strategy that they rolled out today. It’s called over-the-shoulder coveting. Er, NOT coveting. After all, if they aren’t LOOKING at the food, how could they be coveting, right?

This was supposed to be a picture of Obi not looking at The Boy. And it is. But it was better when Obi was also not looking at me. He was feeling contrary tonight. So contrary, in fact, that he photobombed his brother’s picture.

As you can see, Oliver was also working the over-the-should technique.

Eventually, Kitten Thunder got their salmon juice and Obi settled in for a post dinner nap. But not before penning a new Kittaiku:

Posted in Attempt at humor, Cats, Oh please someone think this is funny, OutTV, woe is me.

Ode to the Kitteh

I have no intention of giving up my day job. This should have been posted in April for National Poetry Month. Maybe it is better not to insult such a month with such bad poetry. So…with my apologies to all those English teachers who let me stay in the advanced class because they know I can do better than this…

Hey kitteh kitteh
You are so pretteh.
On a chair
On the couch
I love your hair
I love your pauch.

Hey kitty kitty
Oh my so pretty.
On my head
Or on my legs,
If I stay in bed
For food he begs.

Hey kitten kitten
With whom I’m smitten,
On hip lips
Or on his ears
I give my kiss
While he snears.

Hey cat cat
You are a brat.
On my paper
In my book,
Whilst I labor
You lay where I look.