The Story of Jack

As you know from reading this blog, Obi and Oliver were very close. We’ve always known that Obi would miss his brother when he was gone. We have also known, from his records at the shelter when he was adopted, that he wasn’t cut out to be an only cat. 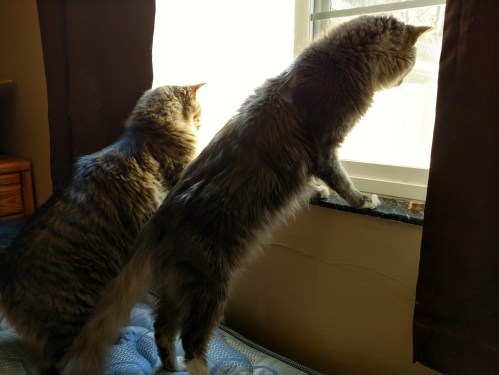 But, with the move and some travel and the loss of Oliver, we didn’t want to pile on a new cat right away. So we waited. As we settled into the new house it was obvious that Obi was lonely. It was time.

I searched the local shelter online during the week and found a couple who seemed promising, based on their limited listings. We were looking for a young adult cat, probably a male. Then, on Saturday, we packed up the whole family and headed out to pick our next family member.

We looked at all the cats. Wandered room to room. No one really clicked. But then I asked a passing volunteer about a cat I’d had a good feeling about online: Blaze. We were directed to the communal cat room behind us – a good sign that he was housed with other cats. We looked at each cat in the room through the glass. None of them was Blaze. Then a tube on the floor moved. And out strolled a grey cat.

He looked at me. He looked at The Boy. Then he saw Buddy. And he walked up to the glass and tried to hug him. It was Blaze. When he saw Okay he attempted a double hug.

We quickly found a volunteer and arranged to meet Blaze in person.

From the second he hopped out of the carrier, Blaze had us. He played with Buddy. He checked out Okay in her carrier. He jumped into The Boy’s lap and demanded pets. We already knew he was good with other cats. He proved he would be good with kids when he didn’t bat an eye at Buddy accidentally smacking him with the door of the metal carrier and then letting it slam loudly into the wall of the cage.

Soon he was ours. 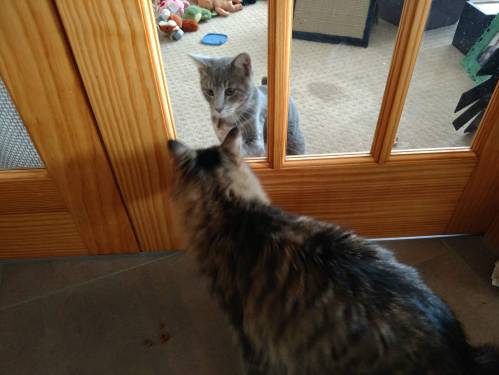 He and Obi were excited to meet each other. We let them meet through glass doors, giving them something in common immediately – a shared hatred of closed doors. When they were allowed to meet there were just a couple hours of “I think we’re playing…are we playing?” Then we all breathed deeply and started to enjoy life with two cats, as is meant to be. 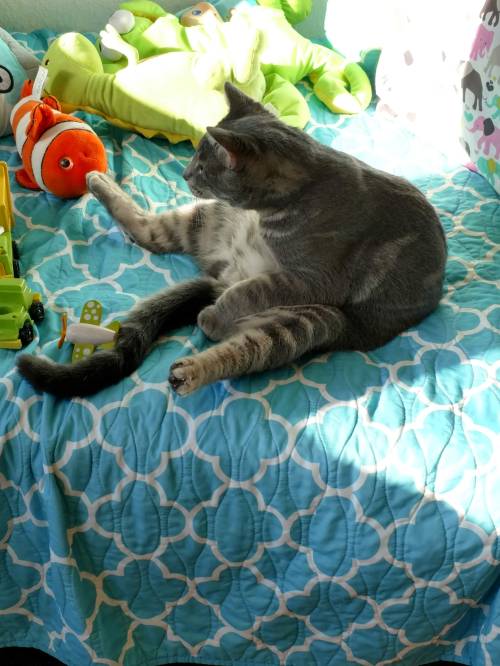 We’d intended to keep his name, Blaze, for lack of any other ideas. But my sleep deprived brain kept calling him Jack. And it fits him well.

Over the months, Jack has moved right in and made a place for himself. Everywhere. He is a pushy little bowling ball of a cat, in the middle of everything. He throws himself onto feet as people walk across the room. He dives into Buddy’s bed when I go to wake him up in the morning. And he has decided that taking care of Okay is his personal mission. Even if she is a little grabby. That includes lying on top of her and purring furiously while she’s in her car seat and during night time feedings.

We say “hi, Jack,” in an exasperated tone, several times an hour. 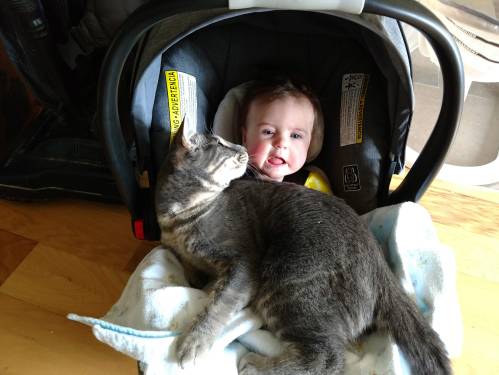 Jack is heavy enough to Thunder all on his own. You can hear him jump off of things from across the house. So an Obi and Jack Thunder makes quite a ruckus. And the Thunder rolls all. day. long. 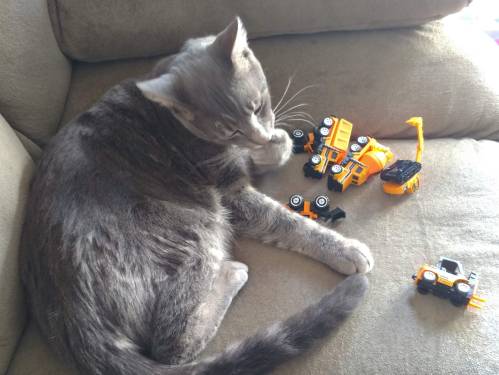 Jack is grey and loves to Thunder and he’s dumber than a box of rocks, but he has not replaced Oliver in our hearts. He and Obi don’t snuggle like the brown kitten did with his fluffy older brother. I, too, have lost my night time snugglebuddy. But, at 4 a.m., Obi visits me and we have a short cuddle. And we’re whole…for five minutes before Obi can’t stand people snuggles anymore. 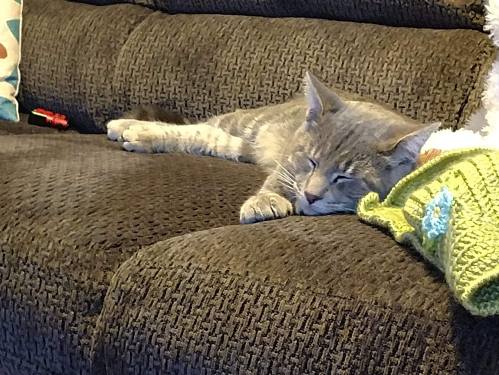 And we love Jack more every day. He’s a good boy.