I believe most cat owners are familiar with the claw: a hand held, claw-like, then fitted over the face of a cat. Kitten Thunder has numerous uses for the claw.

My dad and I firmly believe that grey kittens, universally, love the claw. They’ll walk across the room for it. My theory is that their brains are a little fluffy and they like the feeling of having it tamped down a little bit. It is a favorite kind of pet. Even Gracie, my parents’ tiny cat who only allows you to pet the aura of her aura with the very tip of your aura when she’s feeling VERY lonely, will allow you to give her the claw.

Obi likes the claw as well. The fluffy brain theory would also apply to him. Though he always refluffs his brain with a head shake as he pulls away from the claw. And comes back for another round.

Kitten Thunder also enjoys claw fights. If one of them is feeling feisty but can’t get their brother to play, a good battle of the claw is very satisfying. I can set up several feet away and display a claw. With a fierce look a possibly a butt wriggle, a kitten face is thrust into the claw. The goal of course is to attack the claw off center so he can bite the soft spot between thumb and index finger while dragging the claw to the ground for kicking. There is growling on both sides. Then we break off.

I love the claw.

—
I had totally forgotten about this until I saw it on someone’s Facebook today. If you have cats, you will love http://www.simonscat.com/
—

Today’s guest star  for Thunder Thursday is cousin Spade. The grandpeople brought Spade to Cheyenne with them a couple years ago when he was too young to stay home by himself. Unfortunately he stayed just long enough for he and Oliver to get to the “I hit you but I think it is supposed to be fun” phase. 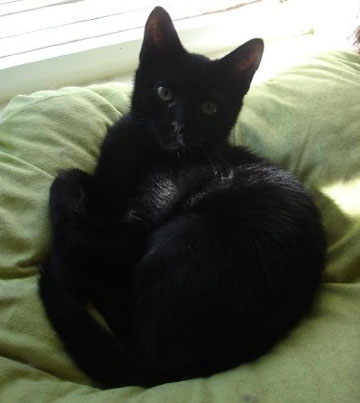 "You can't have a full house without a Spade."

Things you should know about Spade:

1. He looks like he is solid black but when he’s in the sun you can see he is actually black with black stripes. No joke.

2. His nickname is Spadosaurus because he’s basically a bowling ball on tiny feet and he is the LOUDEST WALKER ever.

3. His favorite toy? Rubber bouncy balls. Favorite game? Carrying them to the top of the basement stairs and throwing them down so he can watch. Them. Bounce. Bounce. Bounce all the way down.

4. He adores kids. You need someone to play cars or with your dolls or a video game? He’s in.