You know how your cable provider is always adding new channels of quality programming without increasing the cost? Yeah, me neither. But The Boy is better than the cable company. Last week, Obi was eager to show me what he and The Boy had done in the laundry room.

He started low, to build suspense. He really likes the climbing wall that The Boy exposed. 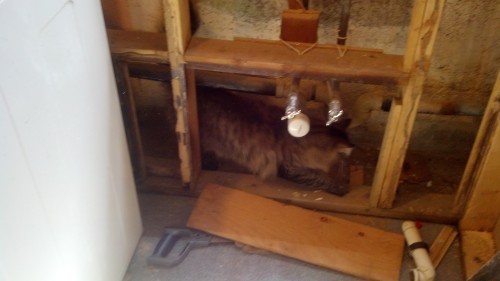 But look! A NEW channel of OutTV! We’re not exactly sure why they covered this window with a wall. Obi very much enjoys sitting on that piece of wood, where he can rest while watching the new channel.

He was certain The Boy would leave it there.

Because why would you mess with such an awesome climbing wall?

While Obi was showing me this, The Boy brought down some insulation. And Oliver watched from a safe distance. 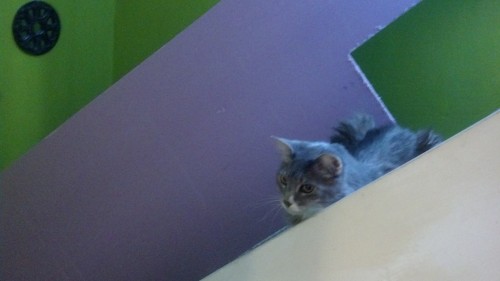 Right after this, The Boy got the thumbs up from me and took out the climbing wall. Obi is mad. But he’ll be happy in the long run – a new window and a very deep sill are in the works.

I was sitting on the exercise bike in the basement, putting some lotion on my hands and letting my hair dry a little bit after my shower when I heard it. The unmistakable sound of a kitten getting in trouble.

Before my shower I’d been in the hallway closet to find a shirt to wear. In went a grey kitten. In went a brown kitten. I shoved a whole bunch of clothes up against the sweater shelves, hoping this would be enough to keep Obi from climbing the “ladder” up into the ceiling.

Except when I went to get Obi, he wasn’t in the section at the top of the ladder. He was standing on my clothes on the other side – evidently he’d crossed the closet and found a wide open space that ran the entire width of the basement. He’d also found a lot of dust bunnies.

I dragged him down, complete with his halo of dust and fuzz, and kissed his ears before setting him free.

Aw, Girl, not in front of the minions.

Obi went with me to have our portraits done for the animal shelter’s board photo this evening. It was outside and we were surrounded by dogs so there was no way I was going to attempt such a thing with Oliver.

Oliver says he is very handsome – I happen to agree – and that any photo would be better with him in it. To fluff his ego, here is his most striking close up. Or at least what he looks like when he’s laying on my chest while I’m blogging on my phone.