Last confession: The Boy and I weren’t home yet when I posted on Tuesday, either. We got home at about 9:30 p.m. after a very long day of travel.

After two and a half weeks, Kitten Thunder didn’t even consider punishing us. Obi was desperate for a belly rub. A very stressed out Oliver needed to be held. The Boy and I needed to sleep.

All night, Oliver woke me up to tell me that I’d stopped petting him. It was a long night. It was a snuggly night.

On Wednesday, the crying started. Now that Kitten Thunder has their people back they are frantic to keep them. Any time Oliver leaves me to get a snack, he starts crying for me and keeps crying until he is back in my lap.

While I was in the shower, Obi supervised. And cried. He hates the steam of the shower. I told him he could wait in the next room. He could not. He had to keep me in sight. And cry.

Then The Boy left the house. Obi cried.

Then I left the house. The Boy says Oliver cried.

Today we both left the house. Both kittens cried when I got back.

Then Oliver held me down. 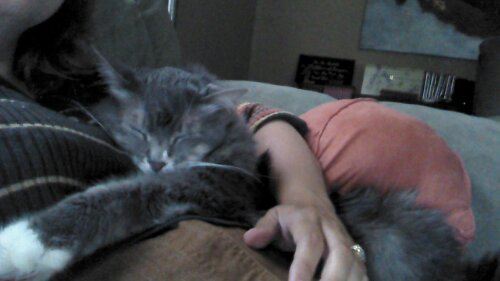 For the first time in two days I am alone on the couch. Obi is on the floor. Oliver was disturbed by me reaching for the remote so he moved to the chair.

Slowly but surely we will all recover.

In the meantime, it is nice to know we were missed.

She who must be punished.

If you’ve noticed that I haven’t been answering my blog comments I apologize. The Boy and I went to New Mexicon on the Chile Immersion Tour. I can now order anything with chile on it without fear because my tastebuds now speak the language of fire.

We were gone for four and a half days and I was expecting some serious punishment. I’ve been pleasantly surprised.

First, we must point out that it was Lori’s turn to babysit and that she came over to feed them, drink coffee and watch TV so they’d have some people time each day. My babysitters – Sarah and Lori – are awesome. I’m happy to report that Obi hung out on the couch with her and Oliver wasn’t a total jerk. He has a tendency to be less than nice around substitute mothers. When The Boy wasn’t living with us he would get an icy stare the entire time he was in my house without me – even though he was watching TV or reading a book for the benefit of Oli.

Mr. Bear is a normal sized teddy bear that on occasion needs to move from one room to another. In the old house, Mr. Bear or Puppy would guard the breakfast plates. Or come to bed in the middle of the night. Or lay in the living room window. It’s fun to watch a cat move a stuffed animal that big. Since moving, Puppy has been in the front window and Mr. Bear has been on the bed in my office. Getting no attention at all.

He was in the kitchen when we got home. He’s been kneaded three times since I put him back on the bed.

Who knows what else has happened that I just haven’t found yet.

As far as punishment which, as all cat owners know, is required: it hasn’t been too bad. Obi was desperate for a belly rub. There’s no playing it cool when your belly hasn’t been rubbed for almost five days. Oli let me pick him up before he remembered I needed to be punished.

And then I fed them…so that was a nice gesture.

We plunked down on the couches – sitting all day is so exhausting – and got some snuggle. Oliver tried really hard to snub me. But I have the chin scratching fingernails. And then I got under the blanky. He can’t lay under a blanky by himself.

Obi and I played a weird game of cave monster while I was laying on the couch…I kind of made up the ceiling structure for the cave.

Then Thunder happened and all is well.

No one needs to tell them that I leave for a work trip tomorrow morning. The Boy can handle the fallout.

Posted in Attempt at humor, Cats, Oh please someone think this is funny, Purr Therapy