First, a random funny: this is what Obi would look like if you cut off all his hair and he was really, really, REALLY happy about it. 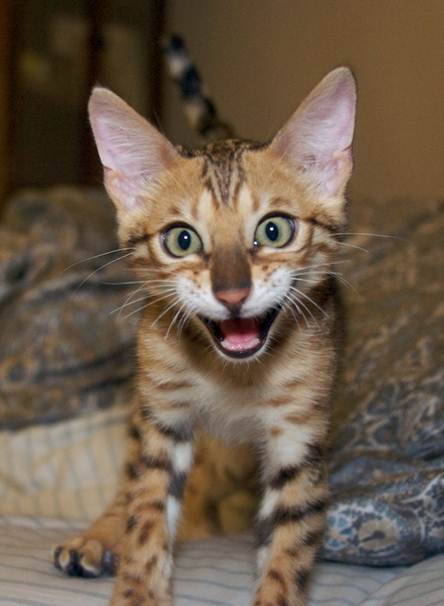 This is from http://goodmorningkitten.com which is how I like to start every day.

The other day I accused the squirrels of Cheyenne of being stupid. But that wasn’t really fair. Everyone learns differently and I shouldn’t have assumed that my squirrels would learn the same way the seller of the feeder’s squirrels learned. So on Tuesday I put a nail in the feeder to hold the lid up a little bit. Just enough that if they saw the nuts and tried to get their face in, it would lift the lid. But…would it work?

For two days I didn’t see a single squirrel. But, today as I drove up to the house at lunch, there were two squirrels working their way across the street. I knew just where they were headed. I sat in the car with bated breath.

The female squirrel was in the lead and I’m thinking she’s expecting kittens because she is OVER the male. She chased him off the porch every time he followed her up there. When he got the hint and went to get birdseed off the window sill, she set her mind to peanuts.

She approached the feeder. She tilted her head left. She tilted her head right. Then…ZOOM! She ran off the porch and up a tree to avoid the Corgi who was walking his owner down the sidewalk. I’d have been more mad, but that dog dragged his owner across my yard and into the tree before he knew what hit him. Or what he hit, rather.

And it gave me a chance to get into the house.

As I was getting out sandwich fixings, the squirrel returned. Again, she contemplated. She jumped up on top of the feeder. Grr, I thought. But then she shimmied down the side and *bloop* into the feeder went her head and out she came with a peanut. Success! Yay!

She repeated the process three times before she had to zoom off again because of two blue jays arrived to check out the porch. Obi had been watching the squirrel with half interest – my pastrami with the other half – and I suspect that the squirrel programming has been going on for two days. Blue jays, however, get him interested. Sink down low the sill, push your ears down flat, holy cow those are big birds interested.

I’m thrilled to see the jays. In the nine years I lived at my other house I only had blue jays in my yard once. My other house is one mile away. The difference in wildlife in that one mile drives me crazy.

Just for giggles, I’m going to feature a fuzzy (or scaley, Zen reminds me) from you guys each Thunder Thursday. We’ll start with my aunt’s cats, Benjy and Fred, because they’re the ones who inspired me to get Oliver a brother. Without them, there may be no thunder. 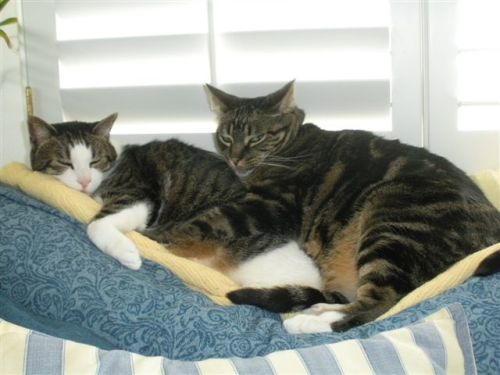 "Does this brother make me look fat?"