If you’ve been following the laundry room saga, you know that things didn’t turn out as simple as just popping a door in the wall so we could have a hallway directly from the bottom of the stairs to the spare room. The Boy is an engineer and he can not close his eyes to things done poorly.

So walls came out.

Plumbing has been changed out.

Electricity has been rerun.

This past week, The Boy put in insulation and framed in a new wall. We’re going to gain about six inches in that room by doing things right. BUT. Kitten Thunder does not like all the noise. They are completely over this bit of renovation.

Since they weren’t going to help The Boy, the kittehs were helping me take a nap this afternoon. I’d drifted off on the couch with a grey kitten in my arms and a brown kitten enjoying his own nap on the loveseat. And then…ALARMS!!! I woke up to my phone, The Boy’s work phone, and his personal phone screaming from less than three feet from my head. I managed to read “tornado warning,” grabbed Obi off the loveseat and told Oli to follow me. Which he did. To the top of the stairs.

The Boy was working in the laundry room and they wanted NO part of that.

Their refusal to go downstairs with me gave me enough time to realize that the alarm is not a siren. No need to go to the basement anyway. So I set Obi down and went upstairs to put in my contacts and brush my teeth. And then, SIREN.

Kitten Thunder was in The Boy’s office. I grabbed Oliver and told Obi to follow me. Nope. The Boy was walking up the stairs and I told him that the brown kitten had run into the living room. I heard them arguing about whether everyone had to go into the basement. The Boy won and appeared at the top of the stairs with a mad kitten in his arms.

The cats are both Cheyenne natives. I don’t know if I’ve mentioned this before – Cheyennites are weather fanatics. After the 2011 storm that wrecked my car, Facebook was full of pictures of cuts and bruises from people that were out looking at the sky when the hail started. And so… 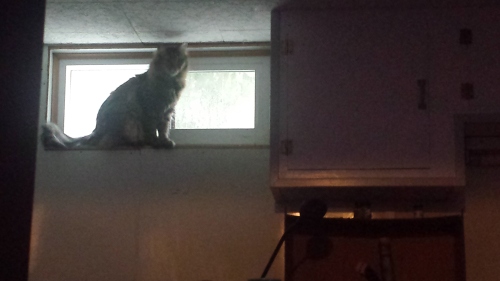 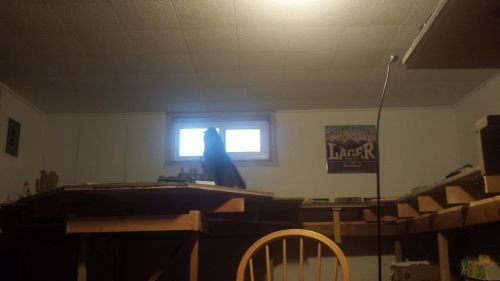 After there was no tornado to be seen, Oliver decided to inspect The Boy’s building abilities by using this water tower as a chin scratcher. 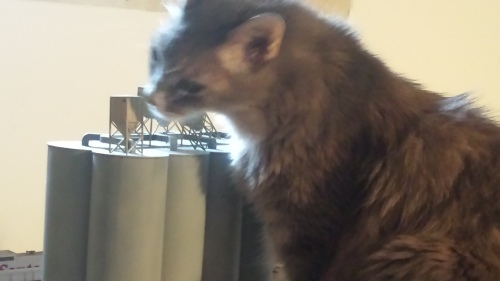 The sirens stopped and the warning expired just as The Boy ran out of things to keep his interest and went back to the laundry room. I set Kitten Thunder free and went to check out the damage.

There was some high powered, horizontal precipitation. The puddle in our bathroom  came all the way to the hall. 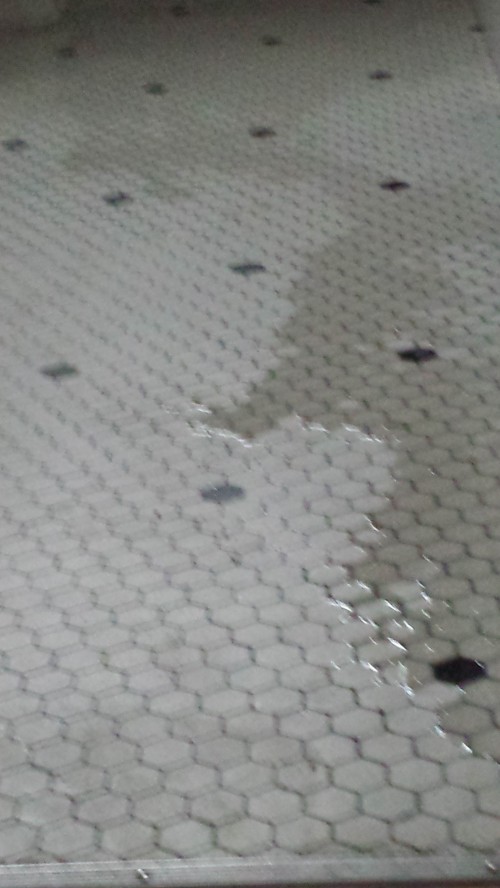 We got several inches of marble-sized hail at our house. The tomatoes were on the right side of the house for once. I’m giving up on ever growing zucchini. 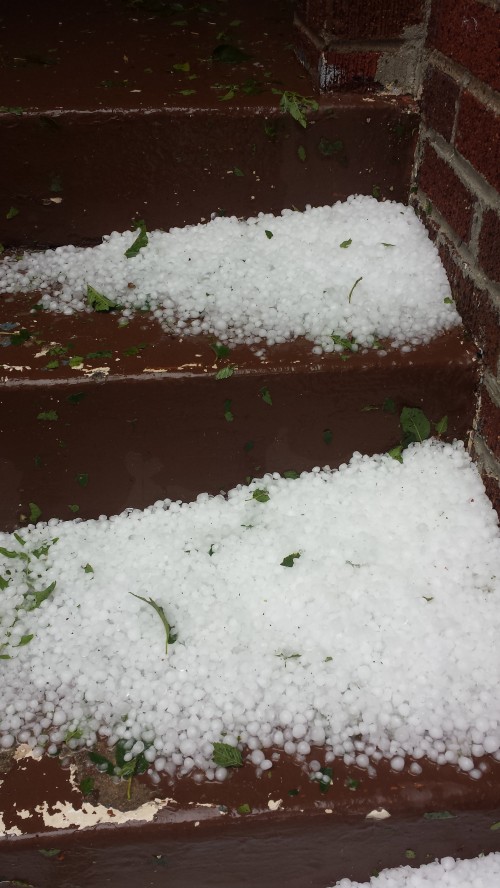 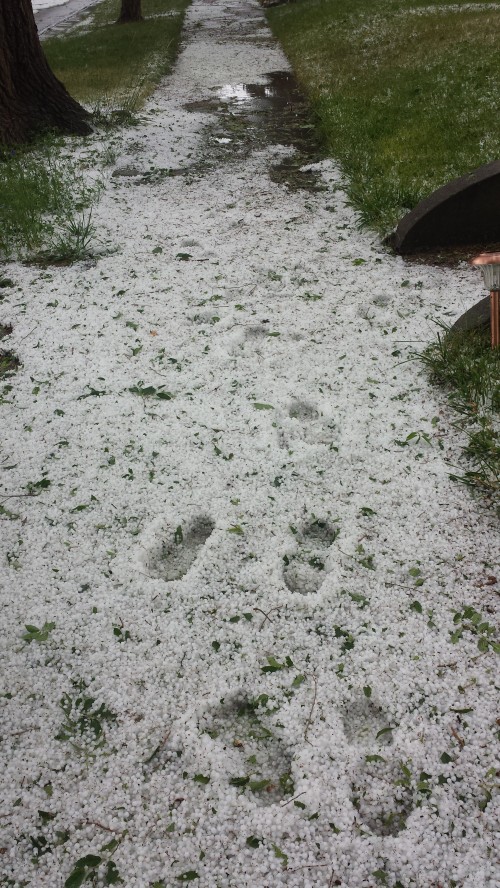 As I was taking this picture, a big pit bull came running up the walk toward me. She was very excited about being free. I talked to her for a couple minutes until her frantic owner, whose fence blew over, came down the alley.

Oh! And then this happened. 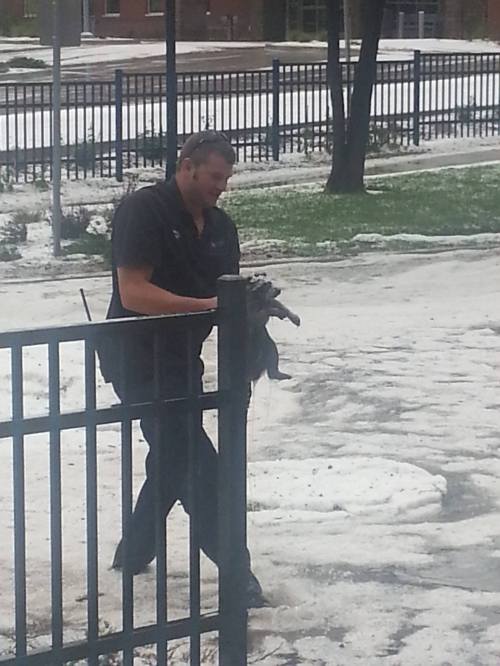 Because whenever our tornado siren goes off, we immediately also get a flash flood warning…thunderstorms, you know. A local posted this picture of EMT Brian Mills pulling a raccoon out of the flood water. After this, he wrapped it up in a towel and held it for a while – which is a step past what even I would do for a wild critter. What a guy.

Oliver just walked in to my office. Weren’t we taking a nap?

I’ve been planning a blog post all day in my head. Then this happened.

It took me twice as long as usual to drive home. For one thing, I could barely see. For another, people were making questionable shelter choices. Like the idiot who decided to wait out the storm in an underpass – next to an already flooded drainage – because he didn’t want hail to hit his precious Hummer. And a whole bunch of people parking under our 100 year old cottonwood trees that drop branches on a sunny day. Um, no. I kept going.

The result of the storm was about 100 dimples (Divots? Dents? Horrific canyons?) in my hood and on the roof of my car. And three places where pieces of my car are actually missing. Sigh. But it makes a good story.

After arriving home and sitting in the driveway waiting for the hail to at least get smaller than ping pong balls, I finally made it into the house. Kitten Thunder met me at the door. Oliver was fuh-reaking out. He wanted to be held. Obi wanted to show me what was happening on OutTV.

The storm passed and The Boy got home so we ventured out to see the damage. There’s a lot, but other than our cars there’s nothing valuable that is lost. I was a week away from peas and tomatoes…not so much any more. Oliver was NOT happy that we were in the Out. To calm him, I went inside and turned on the TV.

That’s when the TV flashed a tornado warning. I tried to get The Boy, but he was down the block. I sent him a text. Not too worried – the funnel clouds were to the east – I turned and looked at Kitten Thunder. “You want to go downstairs, boys?”

Once I was settled in a chair and watching, coincidentally, a program on the Weather Channel about storm chasers in Wyoming, Oliver paced between me and the bottom of the stairs. The Boy arrived. Oli was content.

For the next 20 minutes, Kitten Thunder tried to convince us they needed to be airbrushed. Of course my camera was upstairs so I don’t have the very cute picture of them sitting together in the paint station. I’m pretty sure that’s why they did it.

The TV continued to beep in with warnings of flash flooding, tornadoes and severe thunderstorms. The watches and warnings are pretty common here on the high plains and most people I know were probably outside looking at the weather. But Oli doesn’t know that. So he did what the TV said and went to take shelter in his windowless box in an interior room. I also don’t have a picture of that.

Things are calm now. We have occasional big rain. Obi caught a miller moth. The Boy is reading in the living room. And Oliver is passed out from the effort of being a nervous grey kitten who is in charge of keeping the household safe.

Posted in Attempt at humor, Cats, Oh please someone think this is funny, OutTV, Uncategorized, woe is me.