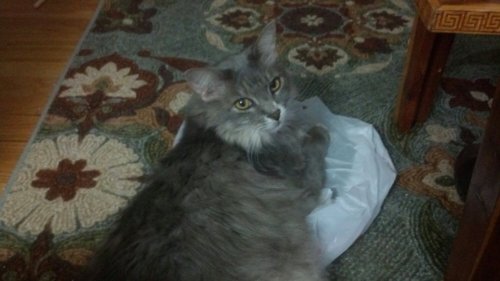 Oliver has a bag. This is his new favorite place to lay and a spot for which he has forsaken the post-breakfast snuggle. Once in a while Obi comes in to remind him that Tail knocked the bag off the coffee table, so Tail’s attached kitten should be allowed to lay on the bag. The grey kitten sees the reason in this…but he doesn’t get off the bag.

This week, we have two new programs on OutTV. First off, there is a little black kitteh wandering around. He looks pretty healthy so he obviously belongs to someone. But he is claiming a lot of territory in the neighborhood.

Yesterday, Black Kitteh had a squirrel up a light post. The squirrel was hanging out about ten feet off the ground, trash talking the kitten. Eventually the kitten gave up and walked away. Except he didn’t give up. He hid around the corner and waited for the squirrel to come down. Unfortunately for him, the squirrel (and I) was not fooled. The squirrel came down the pole and crossed the street to our house. Obi and I watched as Black Kitteh chased the squirrel from one channel of OutTV to the next and the next until they were on the Jeff Channel.

Obi doesn’t go outside but he did not want another kitten in his Out.

The more exciting programming is a sharp-shinned hawk that has moved into the neighborhood. She is very talkative and, though we hardly see her, we hear her cry all the time.

Yesterday, Obi was napping on the back of the couch while I worked. He was enjoying some Smell-O-Vision from the Jeff Channel and he was stretched out very flat. As flat, I thought, as he could get.

Until the hawk swooped down between our house and Jeff’s house and screamed just outside our window. She was so close I could hear her wings. The hair stood on the back of my neck.

And the cat? Got flatter.