Obi is waiting for someone to be unsuspecting. Oddly, no one is falling into his clever trap. 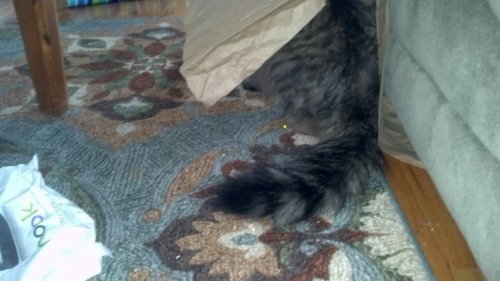 I didn’t blog last night because The Boy and I have a party to go to in Jackson tonight and I needed to get all my work for today done last night. Then this happened.

Technically, we could still get to Jackson for the party. But an eight hour drive through slushy pick – which hit the entire state – for a four hour party with total strangers? It just didn’t seem worth it at 6 a.m. Especially with the Grand Teton and Yellowstone being closed; the original plan was to stay two nights and visit our parks.

So instead, this happened. 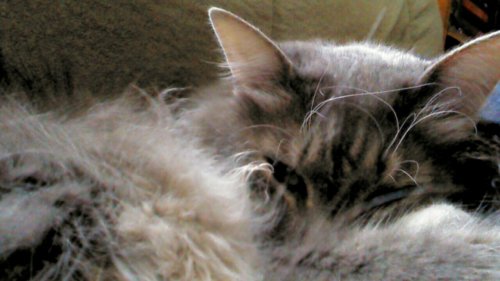 Oliver thinks we should declare a snow day. I told him we will absolutely work from the couch all day but we will, in fact, do some work. He has left me, alone on the couch, in protest.

Not cat related, but worth telling:

Since I crawled back into bed after feeding the cats and checking road conditions, I had time for a bonus dream. I often have dreams about stepping in to help local newsman Bob Geha anchor the news. I’m usually excellent at this. Not today.

First, we didn’t have chairs or a desk so we were sitting on the floor.

Second, instead of doing a short summary and tossing it to the meteorologist, I gave the entire weather report. Poorly.

Then, at the first commercial break I realized I’d just gotten out of the shower and had a towel on my head. I took that off, tousled my hair and started looking for clothes. I found a Christmas sweater. This turned out to be appropriated because – before I could find pants – they introduced me to a small dog in Christmas clothes that was my next segment. I had time to meet Jerry the dog and learned how to make her smile at the camera before we went back on air.

Then the segment started…and I realized I didn’t know why we were talking about Jerry? Was this for an event? A charity? So I started describing this tiny dog. As a mix of a toy poodle and…a malamute.

This, luckily, is where I woke up. Right before a segment with a large Indian family (I’m reading a book about Bengal). I’m hoping that no one in my dreams recorded this episode; it will totally ruin my chances for dream substituting for future newscasts.