Trying Out the Box of the Month

Have I mentioned how perfect the boxes from our monthly beer shipments are?

Oliver has started laying on the recliner a lot. The Boy has started tucking him in under the TARDIS blanket. Naps are bigger on the inside.

But sometimes a kitten gets a little peckish and has to leave the TARDIS for a snack. If The Girl doesn’t notice and make a TARDIS cave by pulling the blanket tight over both arms of the chair, the kitten has to make do by sleeping on top of the blanket.

It’s big enough on the outside.

This morning, the trap was set. And, about an hour ago, Oliver started crying. Just that easy, the little black kitty was caught and I took him off to jail. The nice folks are, right now, evaluating him and getting some food and water.

Of course, immediately after I caught him, I started feeling guilty. He was sweet and scared inside the cage. And he didn’t even get to eat the tuna that lured him into the cage because the plate goes underneath.

As soon as I dropped him off, I went to my car and cried. I cried for the poor black kitty who is a victim of his circumstances. I cried for his owners who, maybe tonight, will notice he is missing and will have to search…or wonder. And I cried in relief that this is over, at least for now. I won’t get to know the rest of the black kitty’s story but I hope he finds a home where he is loved and kept safe. Inside.

A train crossing the road gave me plenty of time to recover, so by the time I got home I was ready to give Kitten Thunder some good news. OutTV is ON.

It is on in my office.

It is on on the cat shelf.

And they’ll watch it. As soon as they are done eating the celebratory tuna that I didn’t need for the trap.

I was sitting on the couch yesterday when Oliver came down to lay on my lap. The Boy was knocking a hole in the side of the house, upstairs, and it had disturbed his nap. The grey kitten did not approve.

Obi was all over it. 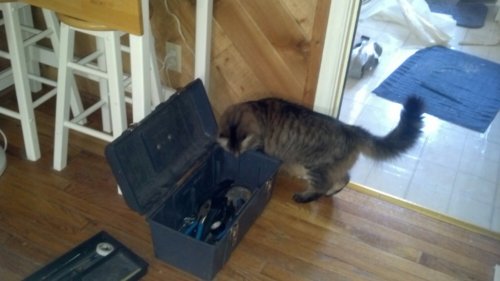 While The Boy was on a run to Home Depot, the brown kitten showed me his project. 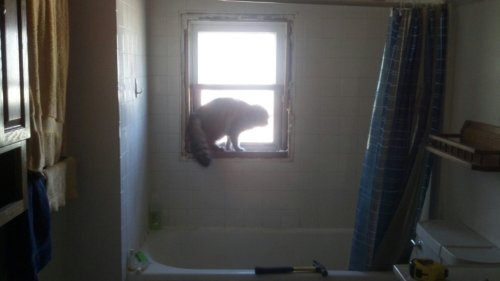 Then The Boy returned.

Oliver came up to see what we were doing. He looked at me with “let’s go take a nap” eyes. I did return to the couch because I had some work to do on my laptop. But The Boy’s work bothered the grey kitten even there – a ladder right next to him on OutTV was not a restful thing.

While The Boy was outside on the ladder, Obi was still upstairs…hanging head and shoulders out of the hole in the wall where a window had been. The Boy did not approve.

This would be a good place to say that The Boy primed a new window sill and put it in. And it was too big, so the window didn’t fit. BUT! When he trimmed it down it was perfectly level so the window went in with no shimming needed. TA DAAA!

This is also a good place to say that I did not sit on the couch, napping and eating bon-bons, while my husband worked. I did my regularly scheduled work on the computer. Then I cleared leaves from around the foundation so it could dry out – today I was supposed to be recaulking in the driveway and pulling out the section of wall that is water damaged. But, because of this plan, it is raining and snowing.

Nothing is drying out.

This morning, The Boy came up and started trimming away excess spray foam from the window. Oliver and I were still in bed. I lifted my head to see what was happening. “Stay,” said the grey kitten, putting a paw on my shoulder.

Obi was supervising the work from the counter. When he noticed the Oli and I were awake, he started to walk toward us. But he walked over the decal that had been on the new window and his feet stuck to it. It was disturbing. It inspired a bath.

Hours later, the window is close to being done. The Boy had to go to a train meeting, but when he comes back he will put up the last bit of trim and seal things like crazy. It looks great. And it will be so nice to have light in the room – the old wood-framed window was covered by an icky piece of plastic so we kept the shower curtain closed to hide it.

During a run to Home Depot, Obi took a nap on my lap. He told me to be sure to let you know that he never would have been able to do this project without The Boy.

The Boy is an excellent helper.

Christmas is the holiday that keeps on giving for Kitten Thunder. Since Oliver has decided to sit on my lap in the middle of my workout, let me take the opportunity to share some photos. 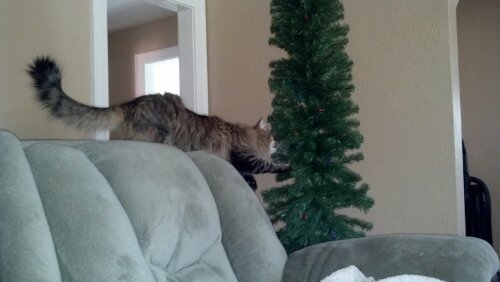 The tree came in. Obi liked it just fine next to his chair.

We moved it to the front of the room. Obi wants to know where that cold air return came from.

Last week I was still going outside without a jacket. No more. Winter has arrived and the quilt came out of the bag. The kittehs had no idea it would be better this way.

Posted in Attempt at humor, Cats, Exercise, Oh please someone think this is funny, woe is me.

Obi on the Job 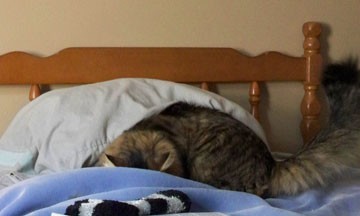 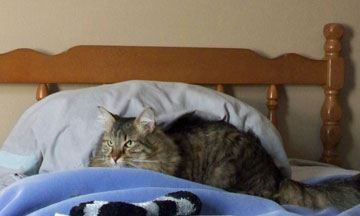 Photos with my phone

First, a pumpkin update. At Kelly’s urging, I went out to turn the pumpkin so Ms. Squirrel could reach more of the rind. But when I got to the porch I found that she had finally broken through to the middle. And she likes pumpkin seeds. A lot.

I’ve mentioned that the women of my family are coming this weekend for shopping. I’ve been trying to clean. What WILL be cleaned up before they get here? Shoemageddon. 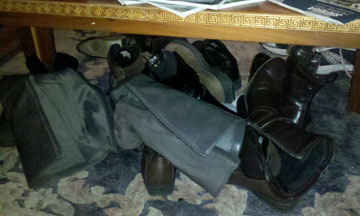 Some of those are The Boy’s shoes. It’s NOT just me.

What will NOT be thrown away, as planned, by the time the girls get here? Paper Playland. It is just too cute. 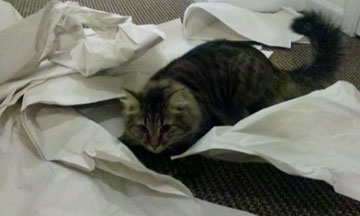 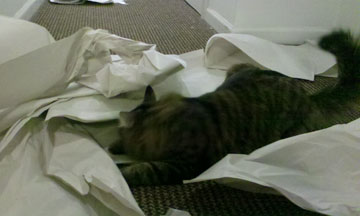 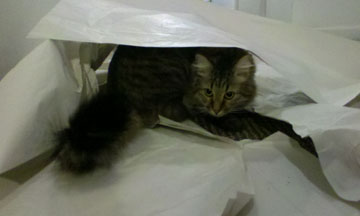 We’ll at least move it out of the hallway. Maybe there’s a nice box somewhere…

Why we wash tomatoes…

"Hey look, The Girl brought me little toy balls. I wonder why she put them on the table." 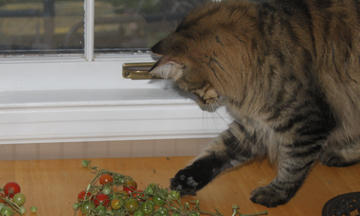 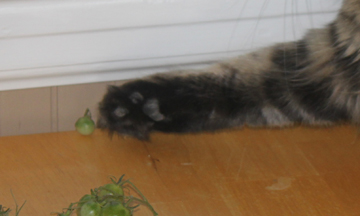 "Then you single one out."

"He might get tricky and try to escape in the valley."

Poor tomato, abandoned on the floor. 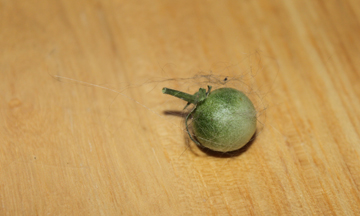 And this is why we wash tomatoes before we eat them.

It’s Thunder Thursday! Today I bring you Troy’s puppy, Denali. As you can see, Denali lives the ultimate Rocky Mountain dog’s life. And Troy has a warped sense of humor.

As a puppy, meeting her first horse.

Taking a dip in the trough. 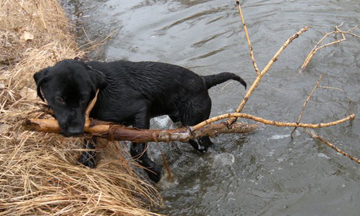 This week: Queen of the snow hill

Posted in Attempt at humor, Cats, Oh please someone think this is funny, Thunder Thursday, Uncategorized

My friend Mona sent me an email on “The Art of Sleeping in a Box” with many funny pictures of cats. Here’s my favorite: 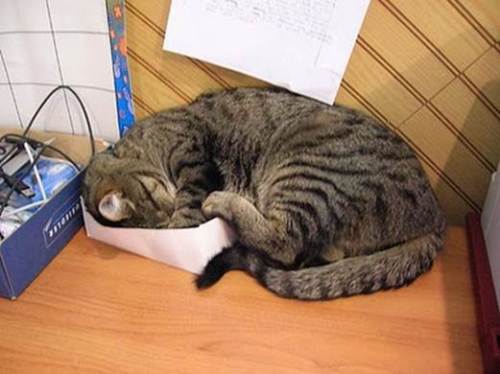 "Even a small box will do in a pinch."

The email reminded me of Oliver’s favorite box. Which is not a box at all. In November, Oli and Obi’s grandpeople gave us a flat screen TV for Christmas. The long skinny styrofoam is a purrfect fit for Oliver.

"Insulation and security are key to a good box."

‏He looks a little tubby in this picture but you’ll have to take my word for it that Oliver is long and skinny, just like this box. He can stretch to fill the whole thing. The tubby look is just fluffy overflow.

When the grandpeople came a couple weeks ago I tried to throw out the styrofoam but our garbage can was full. Now it is in the dining room instead of the entry way and I think it might be okay for it to stay. He sure does love it.

While I was taking pictures of his brother, Obi watched from the dining room table. Then he decided to do something photo worthy to get the attention back on him where it belongs.

It started with him playing with the strings on my sweatshirt from above. Which was funny. But then the funny escalated when he decided to jump to the bookshelf. As he gathered to jump he realized his foot was dirty. Still gathered he licked his foot one and a half times before he remembered he hadn’t gotten the string. But, oh yeah, he was going to the booksh – oh no, his foot is – hey the string!

"The last two minutes have been a blur."

This is him simultaneously reaching for a string, bracing to jump and washing his foot. I got this picture of him before he realized I was laughing at him. Insulted, he left without getting to the bookshelf, getting his foot cleaned or getting the string.

Side note: After work tonight I put a nail in the squirrel feeder to hold the lid open a little bit. Will the squirrels be able to take it from here? Will Kitten Thunder enjoy hours of peanut eating entertainment? Tune in next time…same Out time, same Out channel…

Posted in Attempt at humor, Cats, LOL, Oh please someone think this is funny, OutTV, Uncategorized

“S” is for squirrel. And stupid.

For Christmas, Kitten Thunder received OutTV programming in the form of a squirrel feeder from my aunt. You may remember the adorableness of it – an antique phone type box made out of rough wood. The theory is that you’ll have hours of fun watching squirrels learn how to lift the lid to get a peanut from inside. However, there seems to be an issue.

"If I pretend to make a call, can I have the nut?"

Squirrels, at least in Cheyenne, are stupid.

I know! I was shocked! I really thought they’d get the knack of this fairly simple contraption in a couple of days and we’d be spending a kabillion dollars a month keeping them in peanuts. But two months after hanging the feeder it is still about half full from the original load of peanuts. And the only reason it is that far down is because I put out a “teaser peanut” between the box and the lid at least once a day.

The squirrels have figured out how to get the teaser peanut. Their strategy, however, may be part of the problem. They jump up onto the lid of the box, reach down, and do a kind of reverse football hike to pull the peanut out from under themselves. If they keep their balance, they are still standing on the lid. And that keeps them from lifting the lid to get more.

"When all else fails. Chew through the box."

View of the hinge and corner from the outside.

“This is where the peanut comes out. Where’s the ‘easy’ button?”

And a little more destruction. 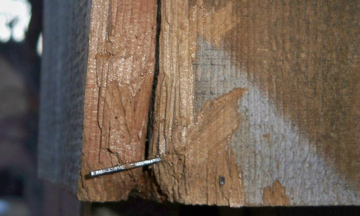 "Two more days of chewing and we'll have a peanut sized hole."

On the bright side, the goal was to provide Kitten Thunder with squirrel programming on OutTV. I’m guessing that these holes are providing hours of entertainment.