There’s a frost advisory for southeast Wyoming tonight.  That pushed us over the edge from “let’s just turn off the furnace and tough it out” to “let’s close all the windows.”

Kitten Thunder does not approve. Even if we did leave one window on the cat shelf slightly cracked for the afternoon.

You call this Smell-o-vision?

I was upstairs because The Boy is working on the leaks in our house and had to run to Home Depot. He called to send me upstairs for a part number. And Kitten Thunder thought they should get me up to date on the project. 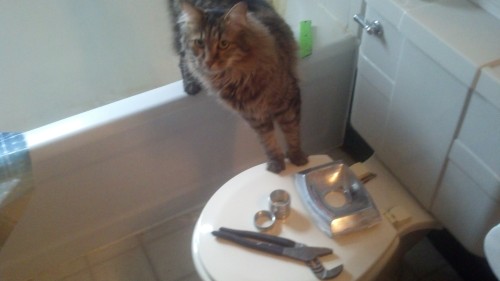 It started with just Obi, who explained the project thoroughly.  Then, when Oliver came in, the brown kitten got up on the supervision shelf to see what the grey kitten would add.

Oliver thinks gaskets and O rings look like pretty good toys. When I wouldn’t let him have them, he decided to contemplate that. From his contemplating spot.

As I took this picture, I was contemplating the incredible rust stain that is forming in The Boy’s shower. Hopefully the new whatevers that are needed to stop the dripping will slow down this stain – I just scoured the stains from this shower a couple weeks ago.

Fully caught up on the project, I turned to leave. Oliver had a suggestion:

While The Boy was working on plumbing in the basement as part of the laundry room project, he had to turn off the water. Now this would be a straight forward proposition in some places, but not, as it happens, in our house. There were numerous options for where to turn off the water to the laundry room. One of those options was in the ceiling of the downstairs bathroom. My bathroom.

The first Monday morning after he worked on it over the weekend, I stepped out of the shower to a big puddle of water on the floor. At first I thought the steam had just gathered on the cold pipes and dripped. So I mopped it up. A while later, I identified the problem. A drip.

It was the kind of drip that you get familiar with in an old home. It was the “this gasket was fine until you touched it” drip.

I put a paint tray underneath it and went on with my day. The Boy was aware of the drip, it turns out, but was hoping it would stop. It didn’t. He was going to have to do something. But, since it was a slow drip, nothing was done right away. A week later, the paint tray had about a half an inch of water in it. As I was getting ready for work, I noticed that Oliver was in the bathroom with me. And then Obi arrived.

But I was not the source of their entertainment.

There was a bubble.

Every time the water dripped from the pipe, a bubble would form in the water and float around for a bit. The kittens would watch it intently until it popped. Then they would continue to watch, hoping it would come back. They’d lose interest and look away just as a new droplet fell to create a bubble. Then they would lean in close to look at the new bubble.

It may be mean of me, but I’m sad to say neither of them ever got pegged in the head by a droplet.

Does that make me a bad “mom”?

Happy Mother’s Day to my mom, grandma, and mother in law. Plus, of course, all the other mothers out there doing what you do. And Kitten Thunder sends out warm purrs and head hugs to all the Girls and “moms” of critters big and small.

Just a few hours after my family left on Sunday, the drain in the laundry room backed up. The Boy came down to move his clothes from the washing machine at the same time Obi and I, already downstairs, walked around the corner to find out what was glubbing. We arrived at Lake Laundry Room at the same time.

The water, luckily, was only that coming from the washing machine so the lake stopped in the hallway. And the water went down immediately when the washing machine was done. We have a half circle of very wet carpet. Life had to go on on Monday, and The Boy’s boss is less okay with nudists than mine (me), so one more load of laundry had to be done.

And before that, I needed to take the world’s fastest shower because Obi and I had been working out when the first calls for an ark came. I left the brown kitten on the stairs to supervise the drain with The Boy – we wanted to see if water would come from the shower as well.

Quick shower completed, I was putting on pajamas when I heard frantic crying from Obi. I rushed to the hallway. Obi, head poked around the corner from his place on the stairs, was calling: “GIRL! I CAN’T GET TO YOU! THE FLOOR IS SOGGY! COME HERE!”

I got a kiss from Obi for luck and took a running leap over the lake, landing on the other side with dry feet.

The plumber came today and liberated a cat-sized swamp minion from the floor drain. I’m happy to say he also rotorooted a kabillion tree roots from our sewer main; calling professionals in for just cat hair would have been really embarrassing.

And the lake has subsided. Orders for an ark have been canceled.

On a tangential, Biblical, note, the grocery store had what I assume was a Passover display. I got myself some Matzo. And this is what I know:

1. Eating matzo on the couch is not a really good idea.
2. Kitten Thunder also loves themselves some matzo.
3. Kittehs, in this case, are as effective as a vacuum.

Things that go bump bump in the morning…

Obi, on occasion, feels like he needs to help Oliver with the process of annoying the humans out of bed. Usually this is by crying in the bathroom that someone has to feed him or the bath mat is going to get it. The bath mat usually gets it. We’re not nearly as concerned about its well-being as Obi thinks we should be.

Lately, Obi has been opening the door on the bathroom cupboard and letting it bounce shut. Usually you just have to tell him once and he’ll stop. Not so, yesterday morning:

Annoyance: accomplished. I got up and stormed into the bathroom. But there was no Obi.

I opened the cupboard. “Obi, how did you…”

Oliver feels very bad for himself because he can’t figure out how to open cupboards but Obi can open them all. I suspect it is because my grey kitten has dainty paws and the brown kitten has giant black feet that we are grateful he never grew into.

As I was trying to get Oliver out of the cupboard, Obi appeared from the back. Hmm. There’s a hole in the back of our cupboard for pipes. So Kitten Thunder has been in the walls. Suddenly I know how they opened the access panel on the other side of that wall while we were gone…

After a whole bunch of coaxing I got Oliver out of the cupboard. Then I yearned for an extra set of arms as I attempted to keep him out while trying to get Obi out. Blocking Oliver – who is getting more upset by the moment – while being casual about Obi coming toward the front and away from the hole in the wall…I have skillz, yo.

As soon as I had them both out, Obi turned around and opened the cupboard door again. Grr. The second challenge was getting both cats out so I could shut them out of the room. This is NOT satisfactory for me, The Boy, or Kitten Thunder. The Boy and I knew immediately what had to be done.

And Obi can still go bump bump bump in the morning.

Posted in Attempt at humor, Cats, Oh please someone think this is funny, Uncategorized, woe is me.

The Boy fixed the downstairs toilet today while I was at the old house painting the storage room because evidently people won’t buy a house just because it has a pink storage room. So now it’s Celadon. Men, that means it isn’t pink. The Boy had plenty of help. Oliver sat on the seat and looked in – helpfully proving once again that his head is not transparent and that it is hard to work through, over or around. Obi stood on the floor and showed how tall he is getting. He was on the floor mostly because he has helped me work on this toilet before and knows I don’t play the kitten on the toilet game.

Obi is big into showing how tall he’s getting lately. Which isn’t tall at all. But it is now tall enough that he has touched my sandwich on the counter when it was too close to the edge.

Oliver had a cootie in his ear and shook his head to get rid of it. I happened to be holding him and got a good thwacking from that ear. Slap! Slap! Slap! Across my face. You could hear it from the other side of the room.

As the sun was setting, Obi was watching the shadows of branches dance on the wall in the dining room. I stuck my finger into the beam and he attacked the shadow for a couple minutes. Then I laughed and he noticed I was in the room. Then, for the first time ever, he looked at where I was pointing! Except I wasn’t pointing at anything…

After dinner, Obi and I were sitting on the couch. Real casual, I lifted up my hand and DEPLOYED THE CLAW! Except Obi was about two inches further away than my reach. He looked at the claw. Watched it desperately trying to reach his face. Looked at me like I was a little stupid. Then I leaned over and moved within clawing range. THE CLAW! 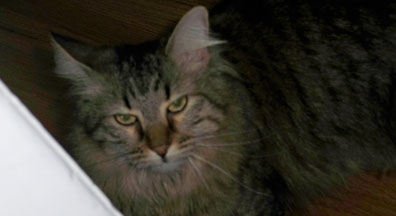 “Drat. How did you find the camera?”

On my way in to blog, I noticed that Mr. Bear is in the hallway again. And Oliver had the need…the need to knead.

"Kneading you into a puddle is how I show I care."