Last week The Boy and I paid $800 for some special OutTV programming. I thought a great blog post would come from “Tree Trimmers in the Front Yard.” Well, I’ve really got to stop thinking.

Kitten Thunder didn’t look out the window at all. They napped through the whole thing.

Today, as one might expect with cats, we had great OutTV for free today. It started with our normal squirrel on the window sill. Obi was doing a great job staying calm. He just watched. No leaping or lunging at the window.

Oliver arched his back. Obi let out a low growl. Both cats grew to twice their size as each of their three-inch hairs stood on end. A lady strolling down the alley was cooing and talking softly.

She turned into our driveway.

She walked to our window..

When she stood back up she was holding a black cat. She turned and carried him back to their yard.

Kerfuffle over. Fur down. Eventually. 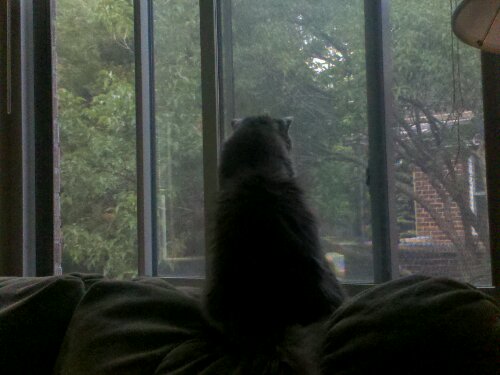 As I started this post, The Boy opened the window in the living room. Jeff TV with smell-o-vision. It’s Oliver’s favorite show.

Forts and trees and a Mean Kitty

So, how did everyone enjoy their forts this weekend? Holly, of The Aluminum Foiled My Plans fame, pointed out a video from The Mean Kitty to me this week. I’ve been a big fan of The Mean Kitty for a long time but had stopped following Mr. Safety‘s work after he got married and stopped doing it for a while. Turns out, though, he’s been doing a lot of work I’ve missed. Including, wouldn’t you know it…a fort. This week.

To this I say…maybe our breakfast nook needs boxes again. Oh, and petcentric.com? Sponsor us! We have hundred of fans! And that’s no typo.

The Boy and I figured out what Oliver is allergic to this week. I was thinking it was weird that he’s turning eight years old this month and this is the first time he has had any issues at all. We were bending our brains trying to figure out what is different in this house. And then it hit us. Cottonwoods.

If you are unfamiliar with the Cottonwood Tree, they are a big deciduous tree that sends out seeds this time of year. In the form of a cotton that floats down from the tree and drifts and gathers. It’s like snow in the summer.

When Cheyenne was founded the whole town had 12 trees. The ladies who came with their rancher husbands were not pleased. So they did something about it. They went around the region and found trees that grew well in the area – including Cottonwoods from Nebraska – and they planted them here. Then they took care of them. The women would send their husbands back to work after lunch with the pail of washwater they’d used that morning and the men would water the trees along the way. Then the kids would bring back the empty pail on the way home from school. Now, Cheyenne is a Tree City USA.

Now, Cheyenne gets drifts of “cotton” in July.

So the mystery is solved.

Oliver is doing better. His eyes are watery and he has sneezing fits and he looks as miserable as all my human friends who have allergies. But he doesn’t sound like he’s on the brink of death. I’ll take that.