Thanksgiving was on Thursday. I know you probably knew that, but I didn’t realize that it was a blog night until sometime in the middle of the night. So you got a long weekend off. Hope it was happy.

Also on Thanksgiving, The Boy and I forgot to have turkey. We went to the buffet at Little America. It is a huge affair with carving stations and shrimp and a made to order omelet station. And a dessert table with 16 desserts and a chocolate fountain. With all that going on, we just forgot to have turkey.

So we fixed that tonight.

I didn’t cook a whole turkey. I bought some breasts and we baked them. Obi was, as usual, irritated by my using the white box in the kitchen. In spite of his trepidation, though, I did not set off the smoke detector. I did dry out the turkey a bit, but it was okay.

While we were eating, Oli and Obi were doing their best not to covet our meals. To reward them I gave them each a piece of gizzard. They were not impressed. Evidently I am the only gizzard eater in the house.

To make up the gizzard episode to them, I let them lick the turkey juice out of the pan. They went to town on that pan.

After dinner, the kittehs joined me on the couch and we succumbed to the chemical wonders of turkey. 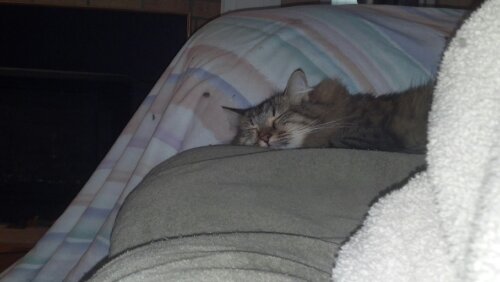