The other day, Oliver climbed into my lap for a snuggle and his face was crunchy. I smelled it, but I couldn’t identify the cause of the crunchiness.

Obi came by a little while later and offered to de-crunchify his brother. The brown kitten happily washed the grey’s face. Both purred.

But the mystery went unsolved. 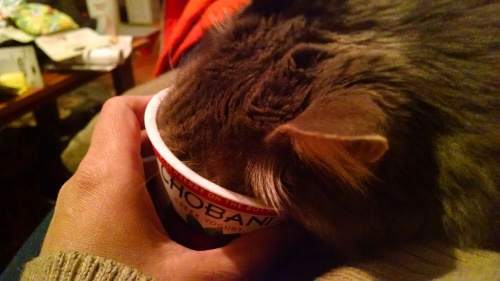 And the ring of crunchy returned. 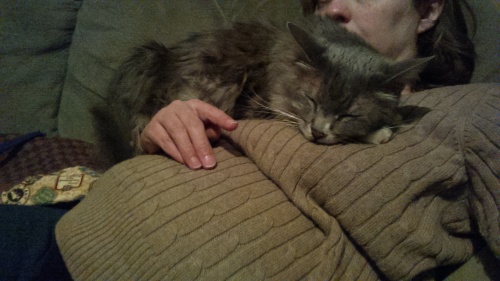 I was in Rock Springs this weekend for state hockey. And it has to be said: YAY RIVERTON RIVER RATS! My nephew’s team took home their second championship.

On my last night in town, Cousin Spade decided to try out my lap.

He was done with me by the time I left. My dad wouldn’t let him sit on the table during lunch – why did he have to use company manners for HER? SHE’S not company.

Plus, I didn’t feel like I should give them treats every time I used the powder room. I know that’s the rule, but it wasn’t a rule made for pregnant women. No one needs that many treats.

So I went home. Since The Boy stayed in Cheyenne I didn’t have to be punished. We went right to snuggling on the couch.

But now I’m being punished. Because this took a lot of nerve.

I actually had two puppies but I let one go to another set of hands for the sake of a puppy selfie.

In case you’re interested, these Maltese Chihuahua mix puppies are up for auction at the Fur Ball in April. They are three months old… So they will stay tiny balls of adorable.

I’m off to shower… And hopefully earn the forgiveness of my grey kitten.

What do you do when it’s 66 degrees but the wind is blowing 45mph with 60mph gusts?

Watch the world blow by.

At lunch today, I ordered a breakfast burrito. I also impulse bought a monster cookie – that’s two cookies turned into a frosting sandwich and rolled in sprinkles. 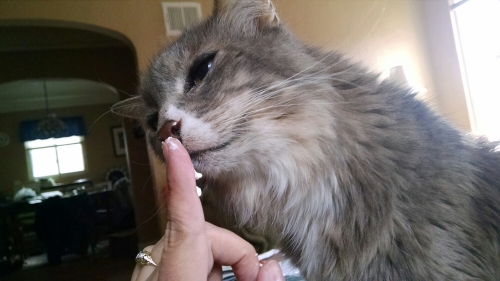 It was a lot. Oliver walked away, leaving plenty for his brother.

It turns out that Obi also has a deeply held conviction about whipped cream frosting.

Oliver and I took a three hour nap this afternoon. I noticed, as he stretched across my neck and by an ear, that he’s a little wheezy.

So, before dinner time treats, I attempted to get a benadryl down his throat. I failed.

In case you’ve never had to take one, let me tell you benadryl are disgusting. They are awful if you swallow they whole. They are even worse if you have to taste the inside. Oliver’s are quartered.

So the pill went in. It came back out. It left a swath of icky taste in his throat and mouth.

I tried desperately to get him to eat some treats to get rid of the taste, but he couldn’t trust me.

Obi didn’t trust me either. He left his treats on the floor and went to check on his brother, hiding in the breakfast nook and gagging on grossness.

Eventually, Obi ate one of Oli’s treats. Not bad. So Oliver had one. Obi tried another. Still okay. So Oli had another.

Then they returned to the kitchen to eat that stack of treats.

Meanwhile, The Boy and I took our dinners to the living room. Soon after Kitten Thunder followed. To tell The Boy that he was their favorite. In fact, he was their only. Who is this Girl of which he spoke? They had no Girl. Never heard of her.

After dinner, I put out more treats.

So… What will we call the baby? I mean, we have a name for him of course. But what goes with The Boy and The Girl as we introduce this new plot line to the blog? Please give me your ideas!

I worked at a conference yesterday. It was fun to see people and wear real clothes. But someone breathed on me. And it’s February.

I woke up with a raging headache and a stuffy nose.

Since the drugs I can take for a cold right now don’t actually do anything, I decided not to get sick. I declared a pajama day and signed up for round the clock purr therapy. 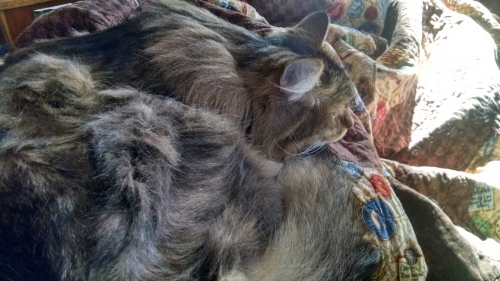 Doctor Obi took a shift in the morning and one in the afternoon.

Of course, being self employed means there no such thing as a whole day off. After dinner I grabbed a computer and covered some small tasks.

Doctor Oliver continued my purr therapy while I worked. 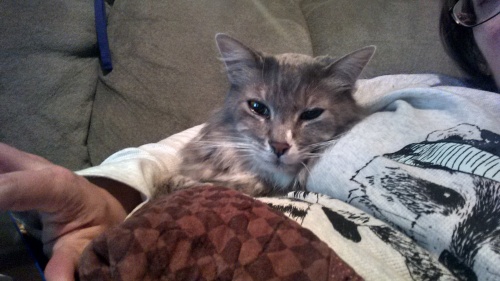 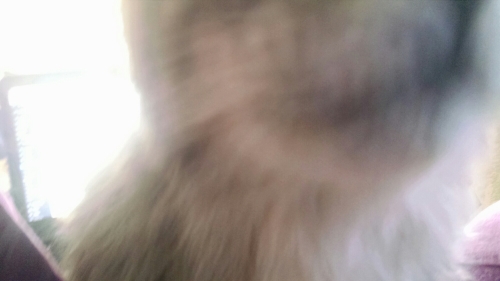 Are you getting my good side? 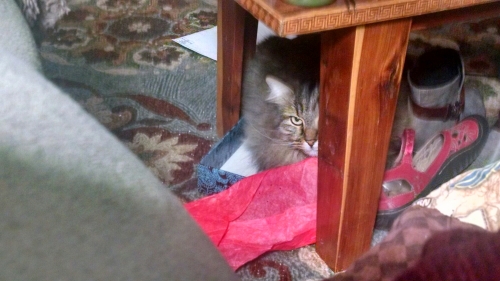 I asked Obi to snuggle with me because Oliver was missing during the Super Bowl. He told me to dream on.

I called Oliver. I called and called.

The grey kitten arrived in the fourth quarter but did not snuggle. He joined his brother under the coffee table.

After the game, as we were all in the kitchen, the truth came out: we may live in Bronco Country but they were rooting for the cats. Genus before region, you see.

Can’t fault them for that.

I didn’t get a snow day. Neither did The Boy. But nine inches of snow did shift our schedules a bit.

For instance, The Boy got up, fed the cats, saw they had a delayed start at work and can’t back to bed. Then I got up to see if I had to go to jury duty at 8 a.m. This made Oliver happy because The Boy’s half of the bed is where the grey kitten sleeps after breakfast on Tuesday when The Boy gets up early to go to the gym. Couch snuggle for the win.

Jury duty was delayed until noon. I have myself half an hour to drive the one and a half miles to the courthouse. I made it…twenty feet. I spent my half hour digging my car out of the alley by the house where it got high centered on snow. Kitten Thunder doesn’t approve of me leaving the house but at least I made them some interesting OutTV. I still made it to the courthouse only five minutes late.

There are many people looking forward to the baby kicking my cats in the head. I’m giving you all the benefit of the doubt. I’m assuming you, like The Boy, think their reaction will be funny and that you don’t just hate my kittens. Well, the baby is trying. This morning he kicked Oliver in the face for ten solid minutes. Tonight he kicked Obi in the armpit. Alas, baby is not strong enough to be felt on the outside quite yet. But I know he’s trying.

I’m proud of myself for this, but I can’t really explain why. While wielding the magic toy making stick this weekend, I found a lid to a shoebox under the couch. The wheels in my head, they turned.

Of course I put a box under the coffee table. 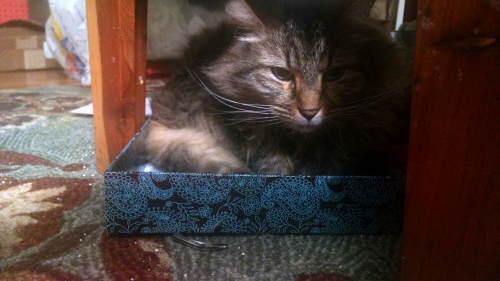